This blog piece is extracted from a longer article, “On the Outs: Global Capitalism and Transcarceration”, published in Vol. 48-1 of Social Justice. 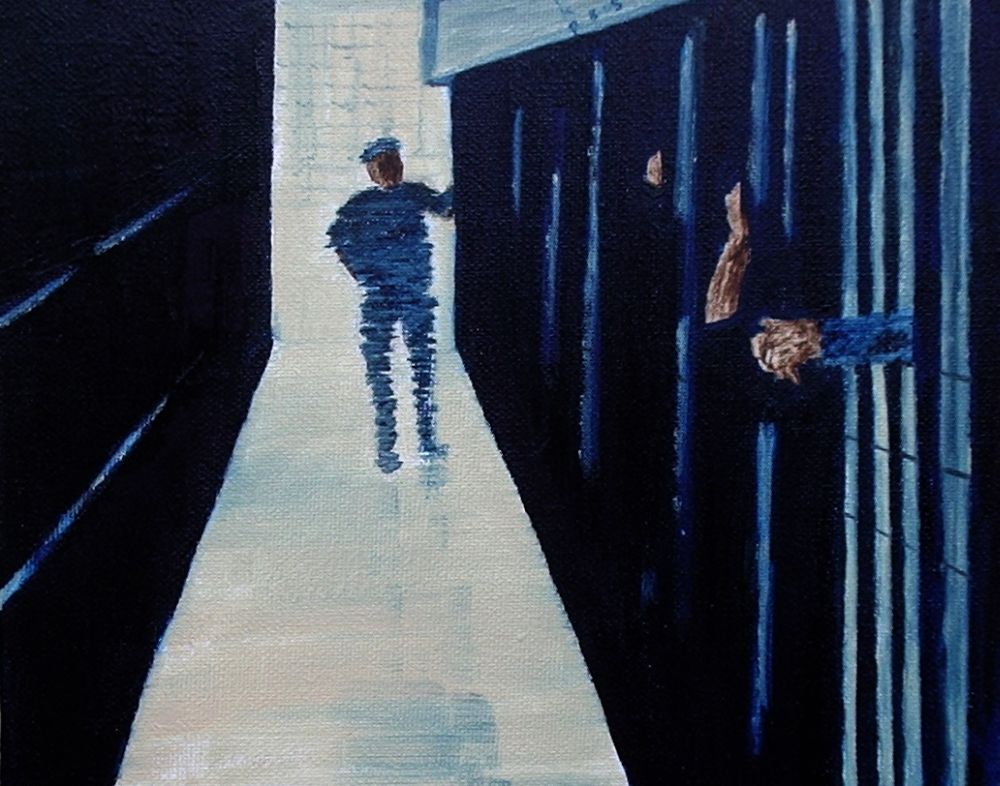 Image by ckp, via DeviantArt.

On a cold April night back in 2008, I was arrested and charged with two felonies and six misdemeanors. Once inside the jail, awaiting my sentence, I could hear loud banging noises, homies screaming out their barrio (hood), and keys getting closer and closer. Finally, the large metal door with a small window in the center opens. A correctional officer with a mean mug look opens the door to my release.

After my release, I became engulfed in the criminal injustice system’s constant surveillance by police and reporting to probation officers weekly. To the experience of thousands, if not millions, these two social control mechanisms contribute to the continued incarceration of people released from prison. Therefore, on the outs I didn’t feel free; instead, I felt imprisoned in my community. It became normal. Years later, at the University of California, Santa Barbara, I began to theorize the link between global capitalism and reintegration.

William I. Robinson’s theory of global capitalism, a theory that addresses the restructuring of global capitalism, coincides with the expansion of surplus humanity, thus, leading to the increase in the prison population, commonly known as hyper-incarceration. His theory, in a nutshell, explains how capital responded to the crisis in the 1970s by going global, which allowed it to break free from the constraints of the nation-state. However, while capitalists accumulated capital, inequality around the globe has reached hideous levels; the top 1 percent of humanity owns more than half of the world’s wealth, while the bottom 80 percent of humanity has to make do with less than five percent of the world’s wealth. Thus, global capitalism has expanded the ranks of surplus and precarious populations.

Here it is essential to highlight Antonio Gramsci, the Italian Marxist philosopher, and critic of Benito Mussolini’s fascist government. Gramsci further developed the concept of hegemony to refer to the unity of coercion and consent in the capitalist system. Consensual domination rests at the level of civil society, while coercion rests at the state level. So, the restructuring of the 1980s and beyond came in response to the challenges to the hegemonic classes posed by the mass upheavals of the 1960s and 1970s. In the United States, civil rights organizations, including the Marxist-Leninist Black Panther Party, developed into anti-colonial, anti-imperialist, and anti-capitalist movements. In response, the state escalated massive repressive mechanisms, including hyper-incarceration.

As William I. Robinson has discussed in his work on global capitalism, in the birth of the 1960s global rebellions and the 1970s crises, transnational capitalists set in motion capitalist globalization as a project to tame resistance globally, regenerate global accumulation, and reestablish the loss of legitimacy. Thus, capitalist globalization or the restructuring of global capitalism has expanded the ranks of surplus humanity in the United States and around the globe. Robinson has developed the concept of the global police state to highlight the linkages between the expansion of surplus humanity, on the one hand, and systems of social control, including hyper incarceration and reintegration, on the other.

One of the major points of the global police state is the convergence of social control, suppression, and marginalization with the economic need to accumulate in the face of crisis (stagnation or overaccumulation). There are various ways to unload overaccumulation but I have focused on  militarized accumulation. In this militarized accumulation, the global elite have acquired an interest in massive investments in war, conflict, and systems of social control. The war on drugs, the threat of terrorism ideology, and immigrant detention centers, as well as gang injunctions (which in California target only poor Black and Brown communities), border and containment walls, prison industrial complexes, and police militarization have all become sources of accumulation.

Thus, hyper-incarceration in the United States has developed in unison with capitalist globalization. For this link, we now turn to Ruth Wilson Gilmore’s book Golden Gulag which highlights the massive expansion of California prisons. The economic crises of the 1970s resulted in chronically unemployed surplus populations left behind as manufacturing jobs disappeared, in surplus finance capital in need of new investments, in surplus land as the farming industry took several hits including a major drought in the late 1970s, and in surplus state capital as the military Keynesian state form lost legitimacy.

We now return to the structural obstacles formerly incarcerated persons face during reintegration. The prison reentry industry (PRI) emerged as a byproduct of the era of mass incarceration in the United States. The PRI is a form of structural violence perpetrated by the state to ensure the continued control and subordination of the most marginalized groups in society. John Lowman and others coined the term transcarceration to refer to the “neoliberal reorganization of prison facilities through a consolidation of both capital and the state’s captive nation.” Transcarceration refers to the non-prison programs beyond imprisonment, which in recent years have become privatized. I argue here that transcarceration is part of the more prominent global capitalist’s agenda to keep the prison industrial complexes afloat.

Today, the prison system has become inscribed in the economic, political, and ideological life of people in the United States and has spread globally. Thus, the criminal injustice system has spread beyond the sum of all prisons and jails into correctional communities, the labor market, transnational corporations, media outlets, laws and policies, and global capitalism. Thus, an abolitionist approach to the criminal injustice system involves developing and struggling for alternative strategies to abolish global capitalism, the producer of all these social injustices. Therefore, it is essential to center decarceration and find an alternative to incarceration. This would include demilitarizing schools, changing and having an accessible health care system for all, creating meaningful full employment, and shying away from the privatization of education.

Through this lens, it is imperative to show that the abolition of the system of hyper-incarceration involves dismantling the larger structure of global capitalism. Therefore, we must revitalize radical criminology, which focuses on the structural processes of inequalities and critiques capitalism. As these massive movements continue around the globe, it is our duty as intellectuals to open up a counter-hegemonic movement from below that combines racial and class struggles while having a revolutionary critique of class exploitation and global capitalism; a move away from post-narratives which dominate today’s economic, political and ideological arenas. Something short of revolution may be out of the question as folks continue to fall down the ranks of surplus humanity into more repressive and militarized systems of social control.

Oscar Fabian Soto is a revolutionary Chicano activist-scholar, Teaching Associate in the Department of Sociology at University of California, Santa Barbara, and a Ph.D. candidate in sociology and Black Studies. He’s also a lecturer at CSU-San Marcos, CSU-Long Beach and San Fransisco State University. He works with formerly incarcerated, disenfranchised gang- involved youth and working class communities in the Southern region of California. He is recipient of a Hein Family Fellowship, Sally Casanova Pre- Doctoral Scholarship and the Excellence in Teaching Award at UCSB among other awards. He gives frequent motivational talks at middle schools, high schools, continuation schools, college campuses, and colloquiums. His teaching pedagogy seeks to dismantle hierarchical organizations, empower people from the margins, and fight for revolutionary system change.