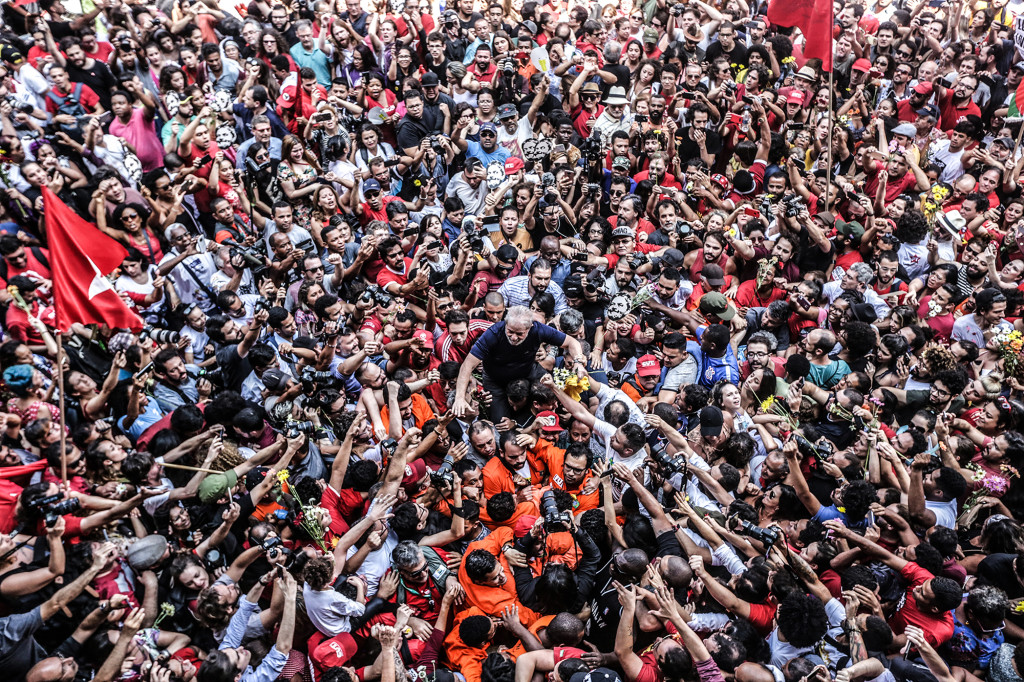 Thirty-eight years ago, in April, 1980 Luiz Inácio Lula da Silva went to jail for the first time. On April 7, 2018, the former president of Brazil, one of the most beloved politicians in the world, went to jail for the second time. Both times the metalworkers union in the industrial suburbs of São Paulo played a significant role. In 1980, Lula was president of the union. In 2018, he chose the union’s impressive headquarters as the stage for what may prove to be his final act of civil disobedience. In 1980, Brazil’s secret police jailed Lula for violating national security laws by criticizing authorities as corrupt while encouraging a strike of more than 100,000 metalworkers in factories. In 2018, Brazil’s federal police—akin to US Marshals—jailed Lula for “crimes of corruption and money laundering.” In his final public address before being jailed, delivered to thousands of supporters gathered around the union hall and broadcast live on hundreds of platforms, Lula reaffirmed his innocence and compared his current imprisonment to his former jailing. In both cases, he argued, his real crime was to have dared to fight for poor people and the oppressed.

Many one-time supporters of Luiz Inácio Lula da Silva’s Workers Party (PT) have doubted the ex-president’s claims of innocence. The charges for which he was jailed are only some among several others that the judiciary plans to level against him. Federal prosecutors and judges, including some appointed by Lula, meticulously constructed the so-called JetWash anti-corruption operation that determined Lula to be the “conductor of a grand orchestra formed to pilfer the public coffers.” In a judicial system centered on professional judges rather than juries, one such judge ruled Lula guilty of accepting an expensive beachfront condominium, its costly remodeling and additional storage space—alleged to be worth about US$1 million—in exchange for helping a construction company get lucrative contracts from Brazil’s state petroleum transnational, Petrobras. Lula consistently denied the accusations and even prosecutors had to admit the absence of written evidence documenting Lula’s ownership of the apartment.

Before she ran for election as the PT’s presidential candidate in 2010, Dilma Rouseff served as Lula’s chief of staff. Her administration continued many of Lula’s policies, but the financial crisis of 2008 hit Brazil forcefully around 2012, causing her to experiment with unpopular neoliberal policies. She won reelection anyway in 2014, demonstrating the massive support enjoyed by the PT. However, the opposition united in attacking her every action, including weekly attacks from ex-president Fernando Henrique Cardoso. In August 2016, the Congress impeached Dilma for misleading congress in her management of the federal budget. Politicians and the mainstream press associated her impeachable offenses to the JetWash scandal, but there were no links. Nearly two years later, prosecutors still had not charged her with any crimes.

The impeachment of Dilma and the persecution of Lula have been accompanied by a rapid fire campaign to replace their policies with extreme neoliberal ones, including a constitutional amendment that locks in reduced social spending for 20 years and the shuttering of the federal ministry responsible for implementing agrarian reform. Moreover, the profoundly unpopular interim president (Michel Temer, Dilma’s vice president, who has single-digit approval rating) has joined the worldwide club of authoritarian populists by claiming that Brazilians “desire” dictatorship, by using the army to police Rio de Janeiro, and by allowing a general to threaten a coup if the Supreme Court were to grant habeas corpus to Lula in the case at hand. With presidential elections coming up in October, Lula had begun his campaign for reelection and polls placed him well ahead of rivals, with the support of nearly 40 percent of the electorate. (In Brazil, voting is obligatory.)

Lula’s supporters see in these events and conditions political motives for the ex-president’s persecution. They see his jailing as extremely unjust, a rouse to repress both Lula and the PT. With the left in disarray, the right is salivating over its first chance in 20 years to compete for the presidency without the charismatic former labor leader in the game. Temer is the one who should be persecuted, they say, not only for betrayal—Temer, whose Democratic Movement Party allied with Dilma, counted on the PT’s support to get elected—but also for Temer’s corruption, which is seen as much worse than Lula’s. He is accused of accepting bribes topping US$60 million and paying millions in hush money. His use of the federal budget to buy votes in congress far outweighs similar payments allegedly made by the Lula administration. Moreover, in trading favors, Lula sought legislation to expand the federal university system, strengthen agrarian reform, fortify Brazil businesses, and create banks and pharmacies with special subsidies for the poor. Temer, on the other hand, bought support by agreeing to sign legislation to ease labor law regulations to make it easier to exploit workers in situations analogous to slavery, and he reduced fines for companies accused of damaging the environment.

For Lula’s supporters, the world has been turned upside down. They see the logic in Lula’s argument when he said in his final public address: “If being a criminal means placing higher education within the reach of poor people, Blacks in the university, poor people able to eat meat, buy cars and travel by air, poor folks farming, starting small businesses, having their own houses. If these are the crimes I committed, I will continue being a criminal in this country, because I plan to do a lot more of this.”

In choosing to hold up in the Metalworkers’ Union hall after receiving the order to report to jail, Lula sought to galvanize his image as the people’s defender. Some had questioned his commitments to the grassroots during his eight years in office. Indeed, he proved to be one of international capitalism’s greatest friends, as he paid off Brazil’s foreign debt, liberated the use of GMO seeds, invested in primary product exportation, and helped turn some Brazilian firms into transnational corporations. However, he also promoted policies and expanded federal spending for priorities like those itemized in his recent speech.

On his last day of freedom, half of his address was dedicated to an embrace of a new generation of leftist leaders. He endorsed at least three candidates for president from competing political parties. He admitted that his age, at 72 years old, left him indisposed to flee, go underground, and lead a resistance movement. He asked his critics on the left to appreciate as necessary the compromises he had made as president, comparing them to ones he had made as president of the union four decades ago.

He asked us to reflect on the lessons his life represents. He reminded us that he is the only individual in Brazil’s 518-year history to rise from the humble origins of a squatter’s son to be president of the nation, proving transformation is possible. He described how he learned politics in the labor movement, took energy from the peasant and homeless movements, and reached out to his political rivals to govern a country steeped in authoritarianism. Persecuted and prosecuted, he returned to his political birthplace to declare his immortality: “It doesn’t matter anymore to try to avoid that I wander all over this country because there are already millions and millions of Lulas. I am no longer a human being. I am an idea, an idea mixed together with your ideas.”

*Clifford Welch is a former San Francisco longshoreman, ranchhand, reporter, and cofounder of the National Writers Union. He teaches contemporary Brazilian history at the Federal University of São Paulo (UNIFESP).