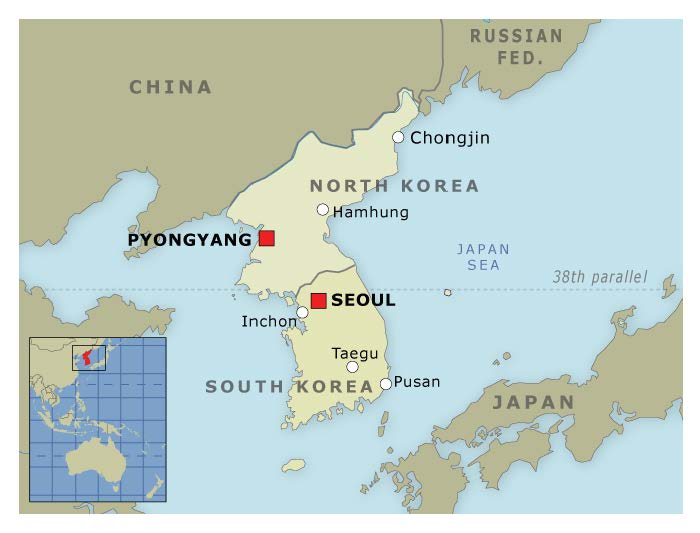 Military tensions between the United States and North Korea have intensified to alarming levels in recent months. Trump has threatened to “totally destroy” this isolated nation of 25 million people, and to “unleash fire and fury like the world has never seen,” calling Kim Jong Un “Little Rocket Man” and telling Secretary of State Tillerson that he is wasting his time with diplomacy. In response, North Korea plans to continue nuclear tests, including test firing a missile capable of reaching the US mainland.  In contrast to the blistering rhetoric of both President Trump and Kim Jong Un, some US experts are calling for talks and engagement. A “military option” cannot solve the current dangerous standoff with North Korea. Rather, we need to call for diplomacy and support Congressional initiatives like the “No Unconstitutional Strike on North Korea Act” HR.4140 initiated by John Conyers, Thomas Massie, and others, together with Senate bills S.1901 and S.2047.

Many people in the United States know little about North Korea. In April 2017, only 36% of people asked even knew where to find it on a world map. Those who did correctly locate North Korea tended to favor diplomatic and non-military strategies compared with those who did not. More education is needed about North Korea as well as about ways in which people can support diplomacy over military solutions. To meet these goals, organizations such as the American Friends Service Committee, Korea Peace Network, Korea Policy Institute, Peace Action, United for Peace and Justice, Veterans for Peace, Win Without War, and Women Cross DMZ are organizing a National Week of Action to coincide with President Trump’s visit to Japan and Korea.

Please join us in:

To better understand the current situation, US-Korean relations need to be placed within a historical context. What follows are some key moments.

At the beginning of the twentieth century, from 1910 to 1945, Korea was annexed and colonized by Japan. Japan’s defeat in August 1945 resulted in liberation, and Koreans had many hopes and visions for their nation’s future. However, the United States and the Soviet Union had their own agendas. They agreed to divide Korea at the 38th parallel: Japanese troops in the south would surrender to US forces, those in the north to the Soviet Union. Later negotiations between Washington and Moscow failed to establish a single Korean government, hence the creation of two separate states in 1948: the Republic of Korea (ROK) in the south and the Democratic People’s Republic of Korea (DPRK) in the north.

This division led to the Korean War between 1950 and 1953. The United States commanded a UN coalition force against North Korea. Approximately 4 million people died, including Korean, Chinese, and allied troops, as well as some 2 million Korean civilians. An armistice agreement, signed in July 1953 by the United States and North Korea, created the DMZ as the new border. A peace treaty was supposed to be negotiated within three months. Over 60 years later, this has still not happened. Instead, there has been increased militarization on both sides of the DMZ and economic sanctions against North Korea that the United States initiated in 1950. While each side continues to demonize the other, some significant efforts were made to reduce the tensions, especially the Agreed Framework of 1994 and South Korea’s “sunshine policy” towards the North (1998–2007). The Agreed Framework included North Korea promising to freeze and ultimately dismantle its nuclear weapons program in exchange for the United States providing nuclear power reactors, ending economic sanctions, and normalizing relations. In the end, both sides hindered the process.

US overtures to North Korea came to a grinding halt in 2002, when President George W. Bush declared it a part of an “Axis of Evil” in his State of the Union address. In 2003 North Korea withdrew from the Nuclear Non-Proliferation Treaty and resumed development of nuclear technology. In 2006 North Korea conducted its first nuclear test, but later agreed to shut down its nuclear facilities in exchange for oil and normalization of the relations with the US and Japan. This effort failed as well. Provocation, hostility, mixed messages, and lack of trust continue to justify the military build-up on all sides.

Today, the United States maintains major military bases in South Korea and conducts regular war drills along the DMZ that date back to 1976. The most recent exercises, in August 2017, involved massing thousands of US and South Korean troops in land, sea, and air operations. In addition, South Korea constructed a new naval base that can accommodate US Aegis destroyers on Jeju Island, and the US has deployed Terminal High Altitude Area Defense (THAAD) missiles in South Korea this year.

For decades, North Korea has considered the United States an enemy nation due to its highly provocative war drills and past failures to honor agreements. This hostility long predates North Korea’s development of nuclear weapons. North Korea correctly sees itself as outgunned by US and South Korean forces and vulnerable to attack. This fear is exacerbated by the fact that no peace treaty was signed at the end of the Korean War. Today, North Korea is surrounded by major military and nuclear powers: Russia and China to the north, US/South Korea across the DMZ, and its neighbor, Japan, that is re-militarizing. The Arms Control Association estimates that as of October 2017 the US active nuclear warhead inventory is 4,018, whereas North Korea only has 10. On numerous occasions President Trump has raised his intention to expand the US nuclear arsenal even more. Observing the US invasions of Iraq and Libya and the US military intervention in Afghanistan, North Korea determined to step up its nuclear program as a deterrent to US aggression.

US efforts to stop North Korea’s nuclear weapon’s program have failed. North Korea has offered to talk with US officials many times. But it will not stop its nuclear program as a condition for talks and will only negotiate when the United States changes its “hostile policy” and ends nuclear threats and economic sanctions. The United States does not recognize North Korea as a nuclear power (unlike the case with Israel, India, or Pakistan), and it will only talk if North Korea stops its nuclear tests. As Trump fails to deliver on his domestic agenda, he is becoming more reckless in international affairs. The military option cannot solve the current dangerous standoff with North Korea. What is needed is a relaxing of economic sanctions and an offer to talk about a peace agreement to finally end the Korean War. Please add your voice!

*Gwyn Kirk is a writer, teacher, and organizer. She is a founder and member of the International Women’s Network Against Militarism. Gwyn is a Steering Committee member of Women Cross DMZ. Her co-authored work includes Greenham Women Everywhere, Women’s Lives, Multicultural Perspectives, a special issue of Social Justice on “Neoliberalism, Militarism, and Armed Conflict,” and the documentary Living along the Fenceline.