We are very sad to announce that yesterday (October 5, 2013) Suzie Dod Thomas, a beloved friend and founding member of the SJ Editorial Board, has passed away after a fierce battle against cancer.

Suzie has been for many years the Assistant Managing Editor for Social Justice. She was a founding member of Bay Area Women Against Rape in 1974 and worked as an organizer in the San Francisco Latin American community, first in 1977, for the Puerto Rican Organization for women, and later for quality health care in the Mission District of San Francisco. From 1976 to 1985, she was active in solidarity work with Central America and Cuba, organizing, leading, and translating for fact-finding delegations to Nicaragua and Cuba. She was also the manager and promoter for author/poet/activist Piri Thomas in his work in high schools, colleges, prisons, youth detention centers, and communities of color throughout the United States.

Suzie will be dearly missed by her family, friends, comrades, and anyone who has been inspired by her warmth, strength, and political passion. Suzie was a long-distance runner for social justice, never giving up on the struggle for a better world, and always taking principled stands against militarism, racism, sexism, and inequality. And she loved to dance and have a good time.

We remember her with the words of a poem Tony Platt wrote for her in 1988.

She has seen America from its margins.
Straddling its borders,
she could pass through
the front door
if she so chooses.
A white Puerto Rican,
A Latina gringo,
looking in,
while looking out,
holding up mirrors
for us
to
see.

She exchanged her diploma for a vision
but didn’t surrender her smarts.
A builder,
she knows construction,
how to navigate the rocks in the river,
how to steer the water
from mountain top to ocean.
She’ll swim the whole course,
leading the way,
a glint in her eye,
in her hair
an ostrich feather. 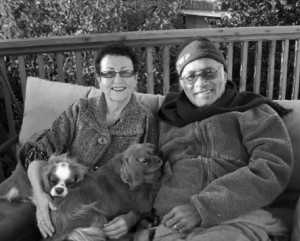 In loving memory,
the SJ Editorial Board

One thought on “Suzie Presente!”