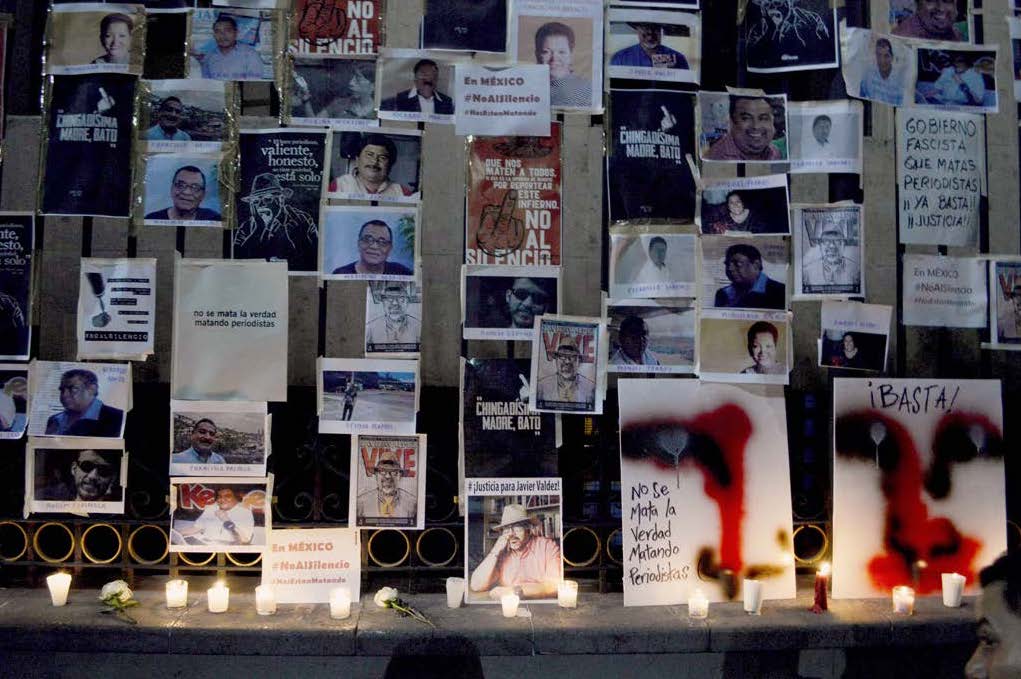 An altar in honor of murdered Mexican journalists located outside government offices in Mexico City. The memorial was erected as part of the protests over the murder of Javier Valdez, May 2017. Photograph by Lizbeth Hernández.

In 1906 Ricardo Flores Magón, an intellectual who fought for freedom and equality during the Mexican Revolution, criticized the “venality and aggressive cynicism” of a press that was “praising the clumsiness and wrongdoings of the government […] covering up crimes, threatening virtues, spreading evil and barbarism.” Today, the situation in Mexico is not much different. Mexico has become one of the most dangerous countries in the world to live and work in if you are a journalist. Censorship, government interference, and violence make a mockery of a free press.

In addition to the known assassinations, 23 reporters have “disappeared” since 2003. Because of threats, both in person and online, hundreds more have been arbitrarily detained by the police, had their equipment damaged, and were even compelled to find shelter away from their homes. According to the Human Rights National Commission, impunity is rampant: 99% of cases involving journalists who have been killed remain unsolved. When this kind of violence is reported, the media gives it little attention. Their deaths might even be reduced to a tweet.

Despite the gravity of the problem, a large proportion of the population does not find the silencing of the press an urgent issue. After working as a human rights defender and as an investigative journalist with a focus on violence against the press in Mexico and Central America, I find it hard to think anyone could be indifferent to this issue. Why the apparent indifference?

First, because of the stark violence of the 21st century, our threshold regarding what is acceptable widens with each threat, execution, and murder. This problem is compounded by the general lack of appreciation for the value of journalists. The highly concentrated television market and the lack of diversity in national media contribute to the general perception that journalists have sold out to political power. Some independent journalists do exist who are gaining public trust—Carmen Aristegui, Daniel Moreno, Salvador Camarena, Daniel Lizárraga, Marcela Turati, Alejandra Xanic, and Diego Osorno come to mind—but they are a novelty within the Mexican media landscape.

Second, the tension between being an activist and a journalist remains unresolved. Activists have to be tough and informed and must put forth radical positions so they can at least get part of their demands met. The raison d’être of activist journalists is to distrust official versions of any story. We raise doubt, ask hard questions, do in-depth research, and report on the facts. In no way does this approach undermine a journalist’s capacity to work as a professional. Unfortunately, the national media only periodically publishes or broadcasts the work of activist journalists.

Mexican journalists live in the worst of two worlds: They are afraid of organized crime and of the government. In a country that is supposedly fighting a war against drug trafficking, it is difficult to differentiate whether a journalist is killed by drug lords or by public officials. We know that public servants commit five out of ten attacks such as threats, arbitrary detentions, or physical aggressions. Local newspapers are the most affected. In Nuevo Laredo, the newspaper El Mañana has stopped covering violence related to narcotraffic even though the region is one of the most affected by it. In 2012 the newspaper’s building was attacked with explosives, in 2013 they received cybernetic attacks, in 2015 the Director Enrique Juárez was kidnapped, and in 2017 the local government launched a campaign to discredit the newspaper.

The last six years have been marked by violence and political upheaval related to the 43 missing students from Ayotzinapa, corruption scandals that are not prosecuted, and government spying against its own dissidents. Now more than ever, it is essential to have a healthy media, watchful and critical of the misuse of political and economic power. Mexico has not undergone a full transition to democracy, and this is also true for the press and the mass media.

Although there are more diverse media today—we now have one more national TV chain and a growing ecosystem of digital media such as Animal Político—the relationship between owners of the written press and political power remains intact. Media democracy implies having a distance from governmental interests and a critical eye vis-à-vis an interpretable reality. In Mexico, print media is part of the governmental machinery. The fourth estate (the press) is not sovereign.

During 2016, the federal government spent over $472 million dollars on governmental advertising. This is not regulated, nor are there transparent criteria for its allocation. The money interferes with information, making it harder to distinguish the truth from pure propaganda.

For local newspapers, the struggle is harder. If we follow the money to see where editorial decisions stem from, we find that around 50% of local newspapers’ income come from official advertising: money given out by the government as a method of control and indirect censorship. In February 2012, the Diario de Juárez received a letter from the Public Security Office that asked the newspaper to change its coverage about violence in order to be able to benefit from governmental advertising. The newspaper made public the attempt of censorship and the government agency had to withdraw its threat. How many cases like this exist? How many do we know about?

On one hand, our form of crony capitalism has led to a market of highly concentrated private advertising to which only the biggest actors have access. On the other hand, uncontrolled and unaccountable governmental advertising and publicity has chilling effects at the federal and local levels.

As shown by José Merino and Darío Ramírez, “more than half of the effective space” in the front pages of Mexico’s newspapers is “devoted to notes that are based only on statements by a single person, institution or organization.” This finding undermines one of the main objectives of journalism: to seek the truth. Every day we see directors and media owners photographing themselves with politicians as a mutual self-celebratory act.

One hundred and ten years later, the words of Flores Magón are frighteningly current. We have not fully transitioned to democracy. The government is still threatening, silencing, and buying off the press. Violence against journalists means that we live in a country where we have to fight and struggle for the truth every day.

* Antonio Martínez Velázquez is a human rights defender and a journalist. Currently he is Executive Director of Horizontal, an independent media and cultural center based in Mexico City. For the past decade, he has worked to enable political participation through digital tools. His work has been published in The New York Times, Foreign Affairs Latin America, Rolling Stone magazine, El Universal, Gatopardo, Animal Político, and Reforma. He coauthored the books Pensar Internet ([Thinking the Internet], 2017); Recuperar la política ([Recovering politics], 2017); CiudadanosMX: Twitter y el cambio politico en México ([CiudadanosMX: Twitter and political change in Mexico], 2011).