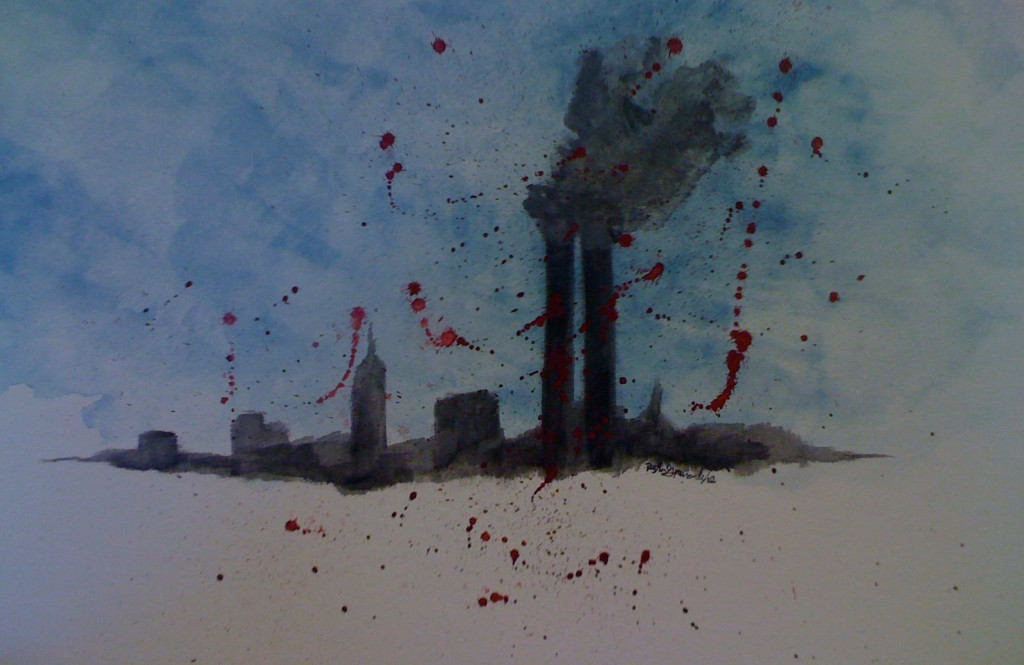 Image by RISIBLErandom, from Deviant Art.

September 11, 2001. The day imprinted on a disparate international collective consciousness. As two planes hit New York’s twin towers, another engulfed the Pentagon in flames, and United Airlines Flight 93 plane came down in Pennsylvania en route to its target, I slipped traversing a ramp in Verona, severing my quadriceps tendon. Undiagnosed but in great pain, I flew home. A week later the tendon was repaired but I was soon in intensive care, pulmonary emboli—blood clots—to both lungs. It was touch and go.

Days later I lay in a ward shared with five others. Ankle to hip in plaster, oxygen mask, and intravenous heparin. Drifting in and out of sleep I could hear the others shouting at the never-off television. It was vitriolic, hateful, and deeply racist. As our doctors and nurses, many first generation immigrants to the UK, went about keeping us alive, they were forced to run the gauntlet of xenophobic commentary. To those around me, dependent, vulnerable, and offensive, their carers appeared to be invisible.

The guy in the next bed was particularly obnoxious. He shouted his demands for attention while berating “rag-heads,” “coolies,” and “Arabs.” From the corner of my eye I could see blood transfusing into his body. I lowered my oxygen mask and in an unusually soft, gasping voice I said, “Whose veins do you think that blood ran through before it saved your life? African? Asian? Aboriginal? Blood has no apparent culture, religion, or identity.”

Reality dawned. The thought that the blood now mixing in his veins could be “alien” triggered panic. Apoplectic with rage, he began shouting, soon losing control of his breathing. I reached for the emergency buzzer and pressed it. As a doctor and nurses arrived I closed my eyes as if nothing had happened.

Over the months of my recovery I edited Beyond September 11. The book was a dissenting collaborative voice against the mobilization of lethal force by the Blair-Bush alliance, signing us up to a “war on terror.” The book’s authors predicted what followed: escalation of war and insurrection; human rights abuses and Guantanamo; destabilization well beyond the borders of Afghanistan and Iraq; the inexorable rise of political fundamentalism; and so on.

September 10, 2015. Fourteen years on, men, women, and children are floating face down in the Mediterranean. The feet of their more fortunate fellow refugees tramp the roads and railway lines through Europe. Despite being on Europe’s doorstep, until now little attention has been paid to the persistent displacement of people from their war-torn homes. For years, struggling states have accommodated millions in tented villages. But now refugees are crossing borders, in search of peace and stability on “our” land. Predictably, within its tightly controlled borders the UK Government is out-of-step with the growing “refugees welcome” movement. It perceives and portrays open arms as an implicit threat to its much-vaunted, but unsubstantiated, “economic recovery.”

Fundraisers and clothes collection points yet again demonstrate deep-rooted compassion by many within our communities. Yet they are no substitutes for the necessary political and economic solution required. In Westminster politicians are faced with the legacy of their inherent chauvinism. Yet again the language of suspicion manifests itself in a discourse of “genuineness,” of hordes massing at the gates, about to “swamp” “our” cities and “our” way of life; of “terrorists” smuggling themselves in through the backdoor.

Without question, the realization of the extent of the refugee crisis is the defining issue of the moment. All European states, their politicians and their civil servants, are exercised in finding short- and long-term resolution. With one notable exception: The Northern Ireland Assembly is again teetering on the brink. As the parties’ MLAs [Members of the Legislative Assembly] crowd, like nodding dogs, around leaders interviewed by increasingly incredulous journalists, their sectarian prejudices are rarely far from the surface.

Watching what has been described as a train wreck unfold, the myopia that dominates politics in this place is palpable. Interviewed by the BBC’s Mark Carruthers, the Minister for Finance Arlene Foster—now doubling as “acting” First Minister—let the genie out of the bottle. Unequivocal and unhesitant she stated her primary function would be as “gatekeeper.” She was now a lone ranger, left in post by her resigning Democratic Unionist Party colleagues. This will ensure, she said, that “rogue Sinn Fein and renegade SDLP [Social and Democratic Labour Party] ministers” would not take “actions that will damage Northern Ireland and principally, to be honest, damage the Unionist community.”

Whatever the outcome of the next weeks, it is clear that this is the severe and unacceptable language of intolerance. It is a rhetoric that can only feed sectarianism and make more difficult the excellent cross-community work that has been progressed by our under-resourced community-based organizations. We look to politicians to represent the best interests of all their constituents, regardless of their perceived or proclaimed identity.

It goes without saying that the recent killings in an internecine conflict of well-known Republicans Gerard ‘Jock Davidson and Kevin McGuigan have had a massive impact on their families and their communities. Not that long ago similar killings also occurred within Unionist/Loyalist communities where paramilitaries still have a presence. These are the outworkings of the decades of war, but no way are they a prelude to its return. The exploitation of such events for political and ideological advantage is unacceptable. Arlene Foster’s misuse of the Chief Constable’s assessment that the Provisional Irish Republican Army remains active, while adopting the language of insurrection to delegitimize both Sinn Fein and SDLP ministers, crosses the line, purposefully delivering Northern Ireland to the brink of direct rule by the UK Government.

Shell-shocked refugees fleeing their homelands have raised international awareness of the excesses of sectarianism, resulting in an outpouring of support from across Europe including Northern Ireland. Yet the alienation and myopia of point-scoring sectarianism at home, demonstrated on the corridors and stairwells of the Stormont Assembly (the “parliament” of Northern Ireland), reinforces the violent rhetoric of entrenched division.

In a few months’ time I’m due back in hospital and, no doubt, will require a post-op blood transfusion. Loyalist, Unionist, Protestant, Republican, Nationalist, Catholic, Secularist, Agnostic, Atheist—whoever is the donor—gratefully and with humility I thank you in advance for your generosity.

* Phil Scraton is Professor of Criminology in the School of Law, Queen’s University. Beyond September 11: An Anthology of Dissent is published by Pluto Books. His most recent books are Power, Conflict and Criminalisation; The Violence of Incarceration (with Jude McCulloch); and The Incarceration of Women (with Linda Moore). The new edition of his bestselling Hillsborough: The Truth will be published early in 2016.