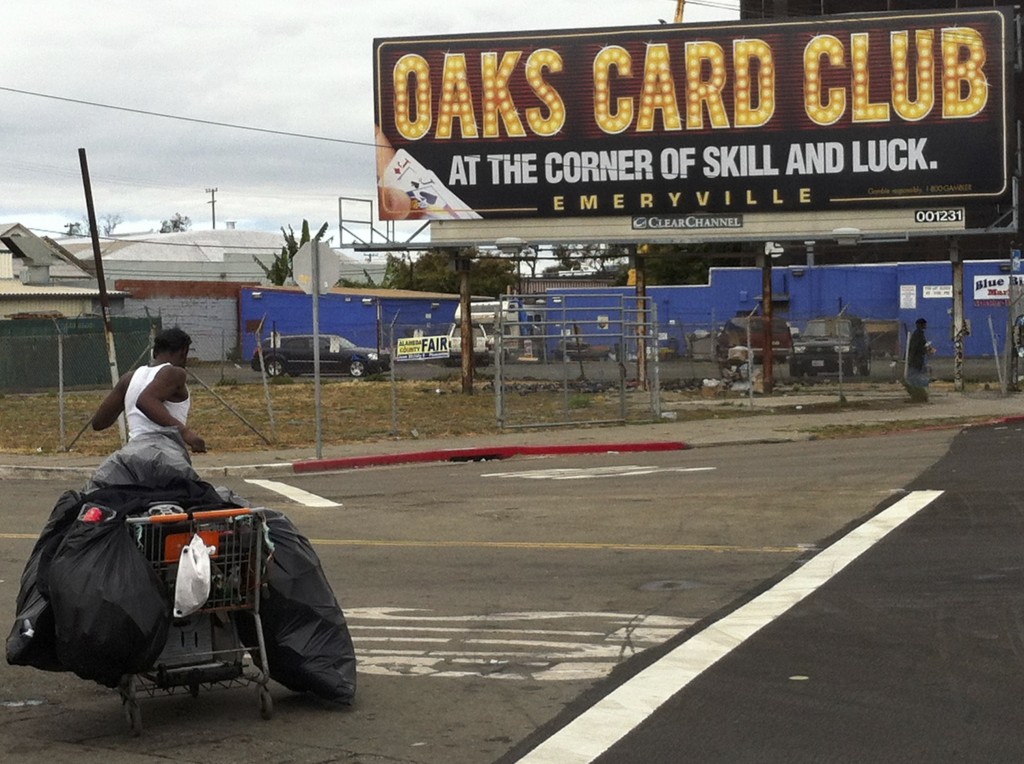 You know, being in prison and not actually knowing how hard it is out here on the streets…. I remember when I got out. I kicked it with my wife for a few hours before I made it to the halfway house. So she took me through my neighborhood, and I said, god damn! Fuck this stuff. Because I didn’t see nobody out there, wasn’t nobody out there, wasn’t nothin’ man. In my corner, it’s called Ghost Town. But it ain’t never been a ghost town. [Now] it was empty! The feeling wasn’t there, the peoples wasn’t there. You know, it was just … empty, man! When I came back, it wasn’t nothing there, wasn’t no foundation, no structure there or nothin’ for me to say, okay, I can pick up right here and build something. It wasn’t nothin’. It was flatland.
– Spike, 10/14/11

At yearend 2012, 1.6 million people were incarcerated in US prisons and jails. If the population on parole and probation is included, some 6.9 million people—roughly 3 percent of the US population—are currently under some form of correctional supervision (Glaze and Herberman 2013). In California, there has been a sustained decline in the prison population in the aftermath of the Supreme Court’s decision in Brown v. Plata (2011). The decision mandated a reduction in the state prison population to 137.5 percent of design capacity to lessen the dramatic overcrowding of state prisons. Nonetheless, over 134,000 people are serving time in state prisons and local jails—a 500 percent increase since 1980—while 45,000 are on parole (CDCR 2014).

Over the last decade, the unprecedented growth in the population under penal control has inspired a significant body of criminological literature on “mass incarceration” in the United States (see for example Garland 2001; Clear and Frost 2013). The disproportionate concentration of imprisonment among poor urban communities of color has led critical scholars to describe the penal experiment of the last few decades as an emerging model of punitive regulation of the poor in a neoliberal society increasingly divided along lines of race and class inequality (Wacquant 2009; Alexander 2010; Tonry 2011).

However, the mass confinement of poor minority men and women from America’s inner cities only illustrates one side of the current penal crisis; the other side is the emerging issue of prisoner reentry. As prison expansion proceeded swiftly between the mid-1970s and the early 2000s, mainstream criminologists and “tough on crime” politicians alike tended to overlook the unavoidable fact that over 95 percent of US prisoners would eventually be released from penal institutions, thus facing the difficult challenge of “reintegrating” into society (Travis 2005).

In 2012 alone, 637,400 prisoners were discharged from US prisons—an average of 1,714 per day (Carson and Golinelli 2013). Statistics show that upon leaving prison, most inmates return to the same poor, segregated inner-city neighborhoods where they resided at the time of their arrest (Clear 2007; Hallett 2012). As research on prisoner reentry reveals, returning prisoners are even less employable than they were before entering prison (Pager 2003); their annual income is 30 to 40 percent lower than the average income of their non-incarcerated peers (Western 2006); and the few among them who are able to find employment are relegated to the secondary labor market of low-income and insecure jobs, where they fill the swelling ranks of the “working poor” (Crutchfield 2014). In addition, nearly 75 percent of ex-prisoners will have a history of untreated substance abuse, chronic illness, or mental health condition at the time of their release (Lurigio 2001).

Before implementation of the “Public Safety Realignment” legislation in October 2011, over 65 percent of prisoners released in California were rearrested within three years, either for a new criminal charge or for a technical violation of their parole (Petersilia 2003; CDCR 2011). It remains to be seen whether the long-term impact of realignment will bring about real decarceration or a simple transfer of bodies (and the responsibility to warehouse them) from state institutions to local jails, but the cycle of incarceration and reentry has become a “modal life event” in the lives of the urban poor, specifically of disadvantaged African American and Latino males (Western 2006). In conjunction with the de facto elimination of welfare and the neoliberal restructuring of the labor market, the prison has thus become a pivotal device for the governing of rampant racial and socioeconomic inequalities in a neoliberal late-capitalist society like the US.

Ethnographic methodology requires a direct involvement of the researcher in the daily lives of the people under study (Emerson et al. 1995). When applied to the study of a particular social problem (e.g., homelessness, poverty, drug addiction, etc.), it is premised upon the notion that a deep immersion in the field will allow the researcher to gather information about the problem as it is experienced, perceived, defined, and acted upon by the social groups most directly affected by it (Becker 1963). Therefore, ethnographic methodology generally involves participant observation, interviews, life histories, and visual documentation (see for example Anderson 2000; Bourgois 2003; Bourgois and Schonberg 2009).

The research material presented here draws from an ethnographic study of the personal narratives and lived experiences of a group of recently released prisoners who face the challenge of “reintegrating” in Oakland, California. Oakland is a formerly industrial city in California that has witnessed, in the relatively short span of four decades: a huge influx of African Americans from the South during the Great Migration (1930s­–1950s); the emergence of one of the most radical and powerful expressions of the black power movement, the Black Panther Party for Self-Defense (1960s–1970s); and, finally, the deindustrialization of the 1980s and 1990s, which has transformed its once vibrant African American and Latino neighborhoods (West and East Oakland) into a desolated urban wasteland.

The fieldwork for this research was conducted in an area of West Oakland plagued by chronically high levels of poverty, unemployment, homelessness, drug abuse, prostitution, and street crime – i.e., what may be defined as a postindustrial ghetto or a “hyper-ghetto,” to borrow Wacquant’s (2009) definition.

Socioeconomic data for the neighborhood where I conducted most of the fieldwork indicates that 50.4 percent of the population is African American, 20 percent is Latino, and 12.5 percent is Asian; 50.3 percent of the residents are currently unemployed or out of the labor force, i.e., they have stopped searching for work altogether; the median household income is $27,034 per year (compared to the average of $40,055 for the city of Oakland), and close to 38 percent of families live below the poverty line (69.4 percent among female-headed households with children under 18 years of age) (US Census Bureau 2014).

Given the racial and class composition of the area, it comes as no surprise that the neighborhood has been gradually transformed into a “service ghetto” characterized by a high concentration of nonprofit associations and community organizations that provide basic services—from preventative health care and drug rehabilitation programs to free meals and shelter—to the large population of poor and marginalized people, including former inmates and their families, who reside in the area. Several of these community organizations are staffed by ex-prisoners who volunteer for them as part of their reentry process.

The main hypothesis of the study is that the reintegration of ex-prisoners is hindered by two mutually reinforcing processes: first, the extreme concentration of imprisonment in poor, urban neighborhoods erodes the social fabric of these communities, disrupts informal networks of support, reduces economic opportunities, and destabilizes already fragile family structures (see Braman 2004; Clear 2007; Comfort 2008). Second, the growing influx of returning prisoners—most of them unskilled, undereducated, politically disenfranchised, and already unemployed or underemployed at the time of their arrest—further intensifies the spatial concentration of urban marginality, exposing former inmates and their families to high levels of social disorganization, economic instability, and existential insecurity (see also Hallett 2012).

In the virtual absence of any form of welfare support for former inmates and their families, and in the wake of broad cost-reduction strategies affecting community supervision programs such as parole and probation, the experiences of the returning prisoners I have followed seem to suggest the emergence of a low-intensity/low-cost model of segregated urban containment that devolves largely to market forces and private actors (nonprofit organizations, low-wage employers, shopkeepers, and slumlords) and is aimed at the variously disenfranchised populations inhabiting the contemporary urban ghetto: ex-prisoners, parolees, homeless persons, individuals suffering from mental illness or substance addiction, chronically unemployed men and women, and undocumented migrants. This barely regulated collection of private forces, backed by the ever-present threat of prison or jail, is all that is left in a postindustrial “ghost town” stripped bare of the community networks and welfare services that populated the neighborhoods before the penal experiment of the 1980s and 1990s.

In this series, I will present raw materials from the field in an attempt to illuminate some of the survival strategies adopted by ex-prisoners and their families as they return to their dilapidated communities and join once again the swelling ranks of the urban poor.