If going home is denied me then I will have to stand and claim my space, making a new culture—una cultura mestiza—with my own lumber, my own bricks and mortar and my own feminist architecture.—Gloria Anzaldúa, Borderlands/La Frontera

In the summer of 2017, San Francisco’s historic Galería de la Raza showcased the work of a group of artists who engage the question of what it means to be simultaneously Mexican or Chicanx and queer—that is, to be who they are. To be queerly tèhuäntin, Nahuatl for “us.” To be queerly us. Queer—or cuir, as the term is increasingly used in Spanish—in the sense of noncoventional sexualities and nonnormative gender expressions. Cuir us.

The artwork reveals a decade-long struggle for social justice and dignity by queer communities on both sides of the Mexico–US border. The LGBTQ and feminist movements that emerged in the 1970s in Mexico and among Chicanxs in the United States faced many formidable challenges; not least of these was how to transform a cultural politics of national/ethnic identity that rested discursively on patriarchal constructs of heterosexism and machismo, narrowly defined womanhood, and rigid binaries of gender and sexuality.

Activist art proved to be one of the movements’ most effective tools for producing counterhegemonic discourses about gender and sexuality. Since 1987, an annual art exhibition has been mounted at the Museo del Chopo in Mexico City, as part of their LGBTQ pride celebration known originally as the Semana Cultural Gay. In the assessment of the late Carlos Monsiváis, these cultural mobilizations “constituted for civil society critical proof of the way in which alternative spaces have contributed to the diversity and the democratization of Mexican life.” In addition to the significance of the social space created by these exhibitions, the hundreds of widely viewed images were important in and of themselves in producing new visual discourses about the possibilities of making a home and a future in which one could be simultaneously queer and Mexican.

The year 1987 was also a pivotal one for queer Chicanxs, marked by the publication of Gloria Anzaldúa’s groundbreaking Borderlands/La Frontera that gave us an intersectional analysis of the “borders” between cultures, genders, and sexualities. It was against her own Chicano community’s sexism and homophobia that Anzaldúa asserted her determination “to stand and claim my space.” In her “How to Tame a Wild Tongue” she declared: “I will no longer be made to feel ashamed of existing. I will have my voice: Indian, Spanish, white. I will have my serpent’s tongue—my woman’s voice, my sexual voice, my poet’s voice.” In doing so she helped to open spaces for other queer Chicanxs. Chicana Lesbians: The Girls Our Mothers Warned Us About, for example, was published in 1991, and in 1995 Galería de la Raza hosted Mi corazón me dió un salto: A Queer Raza Exhibition. Now the new millennium has witnessed the emergence of fierce UndocuQueer artists.

With this exhibition, Galería de la Raza celebrated the 30th anniversary of the Semana Cultural Gay (now Festival de Diversidad Sexual) in Mexico City and the publication of Anzaldúa’s Borderlands/La Frontera by paying tribute to the many brave artists on both sides of the border who continue to engage the question of what it means to be queerly tèhuäntin, cuir us. The show included work by some pioneering elders—Yolanda Andrade, Ester Hernández, Taller Documentación Visual, Joey Terrill, and Nahum B. Zenil—as well as pieces by a younger generation of queer artists: Félix D’Eon, Gabriel García Román, Rurru Mipanochia, Yosimar Reyes, and Naomi Rincón Gallardo. We highlight a few of them here.

Photographer Yolanda Andrade (b. 1950, Villahermosa) received a Guggenheim for her project on Mexico City, which included photos of participants in the capital’s annual LGBTQ pride celebrations. The three we selected for this show reveal a range of Mexican genders and sexualities. We also included Andrade’s portrait of the late Nancy Cárdenas, a writer, actor, theater director, filmmaker, and lesbian rights activist who in 1974 cofounded Mexico’s first gay organization, the Frente de Liberación Homosexual. Journalist and gay rights activist Braulio Peralta wrote that Andrade’s photos give us the opportunity to experience “difference, presence, not being absent, remembering the taste of what’s real: that we are all equal because without political freedom there is no sexual freedom!” 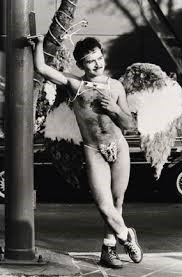 Gabriel García Román (b. 1973, Zacatecas) describes himself as a Mexican-Americón, born in Mexico and raised in Chicago. He is a multimedia artist best known for his Queer Icons series, whose subjects are drawn from many facets of the gender and queer spectrum. Several of his Queer Icons were exhibited, including a portrait of undocumented trans rights activist Jennicet Gutiérrez. García Román explains: “Much like traditional religious paintings conferred a sense of safety and meditative calm on a home, the works in this series aspire to provide a similar sense of refuge that’s drawn from the inner grace of the subjects and projected outwards onto a world that might not always be safe.” 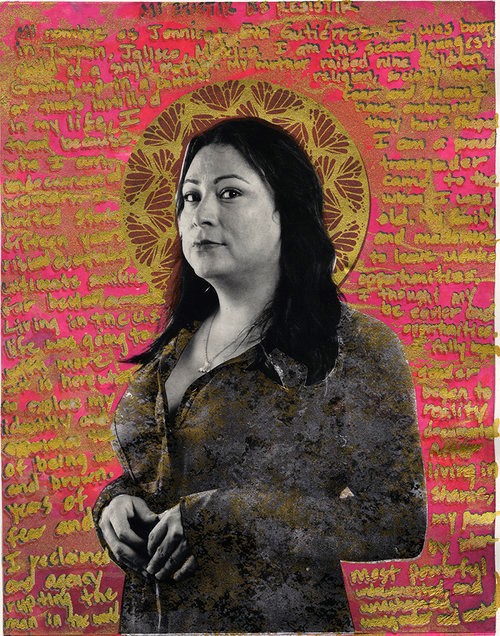 Ester Hernández (b. 1944 Dinuba, California), an internationally acclaimed visual artist based in San Francisco, was born in California’s San Joaquin Valley to a Mexican/Yaqui farm worker family. Two of Hernández’s iconic portraits of queer women were included in this exhibition. Renee, La Troquera is a sexually alluring female truck driver whose sleeveless shirt reveals strong arms as her tongue licks the index finger of her leather gloved hand. In Hernández’s erotically charged La Ofrenda, the Virgin of Guadalupe might be read as “Our Lady of Lesbian Desire.” La Ofrenda graced the cover of the groundbreaking 1991 anthology Chicana Lesbians: The Girls Our Mothers Warned Us About, edited by Carla Trujillo. 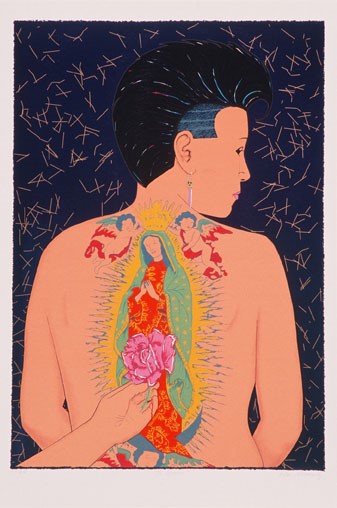 Rurru Mipanochia (b. 1989, Mexico City) received a prestigious Young Creators grant from Mexico’s Fondo Nacional para la Cultura y las Artes (FONCA) in 2016. The artist, who avoids gendered pronouns in self-descriptions, claims to be “a cyborg built in Nibiru, but discarded to the Earth by defects in its operating system, reborn in Mexico City.” Rurru’s work plays with Mesoamerican iconography representing abject deities, bodies, and sexualities. In Rurru’s images of Tlaltecuhtli, a Mexica diety traditionally represented with female characteristics despite its male name, the god is endowed with both penis and vagina. Rurru’s artwork was made available by ArtSpace Mexico. 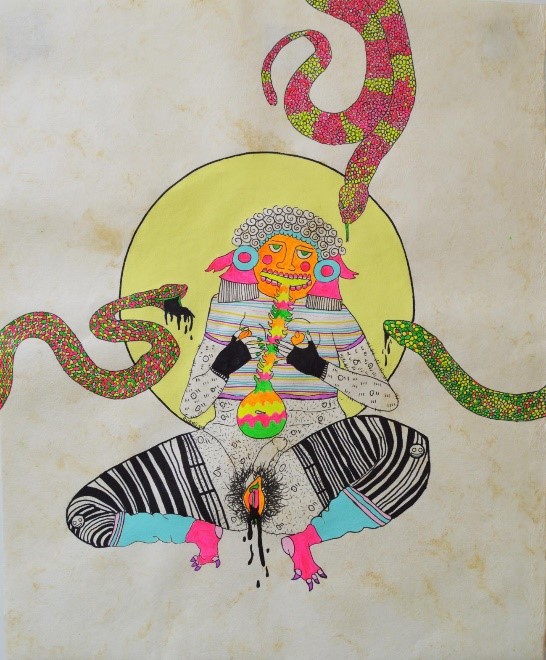 In the life and art of Los Angeles native Joey Terrill (b. 1955, Los Angeles), the Chicano and gay movements are inseparable: “Since my high school student days . . . social activism and Chicano politics have played a pivotal role in my life while at the same time I embraced the politics of the Gay Liberation Movement and challenged the societal oppression of homosexuality.” His La Historia de amor turns the classic Mexican kitsch calendar image of Popocatépetl and Itzaccíhuatl into gay lovers promoting solidarity with “your bothers with HIV.” His Still-life with Viracept speaks to the ways HIV meds became part of daily life, a presence as common as striped Mexican table cloths, Catholic icons, and sliced bread. And his He Wore Ray-Ban Glasses, a Rolex Watch and He Used to Eat My Ass boldly asserts the centrality of same-sex desire even in the face of a homophobic culture and STDs. 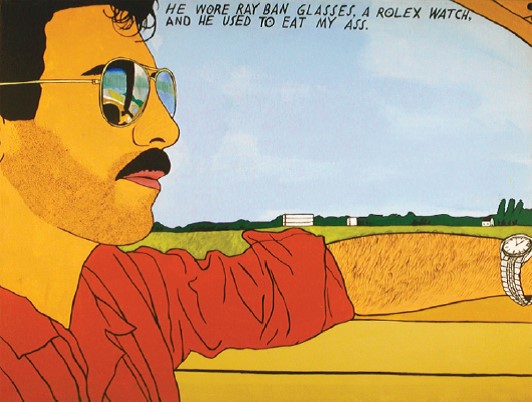 Joey Terrill, He Wore Ray Ban Glasses, a Rolex Watch, and He Used to Eat My Ass, acrylic on canvas, 1985

Nahum B. Zenil (b. 1947, Chicontepec) is a painter and poet who played a leading role in establishing Mexico City’s annual LGBTQ exhibitions. Zenil gained international acclaim in the 1980s as one of the foremost exponents of a school of art that critics called “neo-Mexicanism,” which also included Enrique Guzmán, who committed suicide in 1984, and Julio Galán, who died in 2006. These gay men inserted their own body into dense fields of iconic national symbols, a queer body reclaimed from the shadowy corners of Mexicanidad. At the center of Zenil’s extensive oeuvre are self-portraits in which the artist’s body experiences the pains, pleasures, desires, and struggles of life as a gay, Catholic Mexican. In the pieces shown in our exhibition, Zenil appears as the enduring homoerotic icon Saint Sebastian, as the multitude of gay men haunted by the specter of AIDS, and as the masses demanding respect for democracy and human rights. 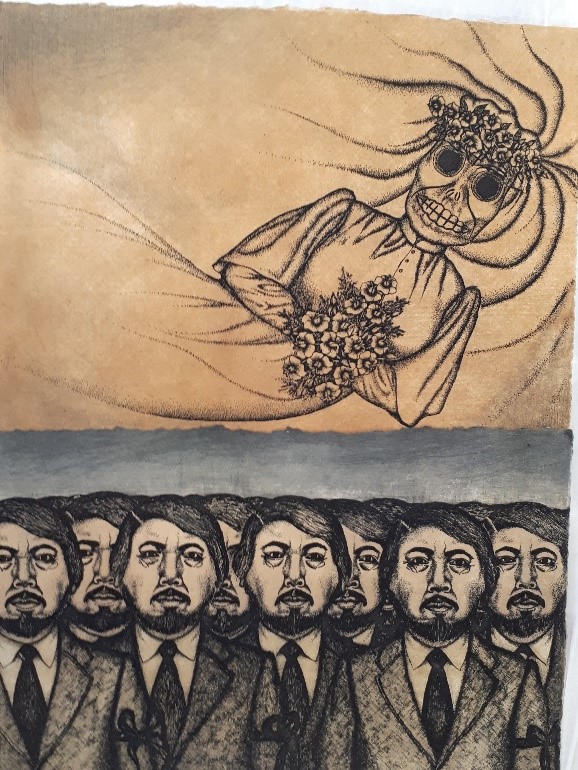 May the work of these artists guide us toward what José Esteban Muñoz called a “forward-dawning futurity.”