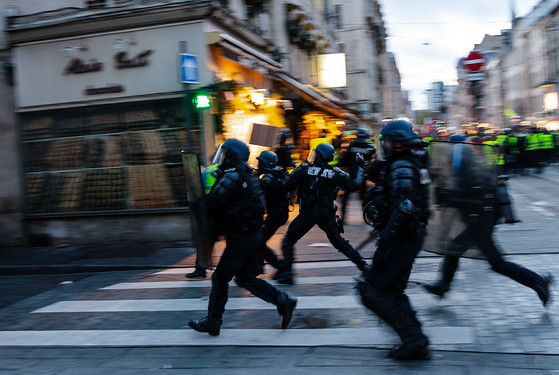 For some months now, France has been the scene of a turbulent upheaval. Fierce social conflict has long been a defining feature of the country’s political life. It has been a historical given in a nation constructed, for the most part, after 1789 on the basis of a revolution of universal scope that, along with the social advances won in 1936, 1945, and 1968, still exerts a strong hold on the collective memory and the country’s institutions, despite attempts to eradicate all traces of it.Yet for nearly 40 years, France, like all the other countries of the North without exception, has found itself encased in the deadly straitjacket of devastating neoliberal policies that can only be seen as an extraordinary act of social violence, an assault on labor. Their destructive effects—on individuals, society, and even the environment—are propagated by a state that works hand-in-glove with whomever wields the most power at a given time. They are further aggravated by the constraints of the anti-social content of European Union treaties that the French rejected in the 2005 referendum but which were imposed on them in a denial of democratic process—an additional assault on an entire people. It is this particular perspective, in the general context of a systemic crisis of global capitalism, that explains the increasing waves of popular uprisings that have taken place in recent decades: strikes in 1995, riots in the suburbs in 2005–2007, demonstrations in 2000 and 2010. Today, a widespread discontent and general feeling of malaise finds its expression in the yellow vests movement, named after the high-visibility safety vest for motorists worn as a uniform by hundreds of thousands of French people expressing their disapproval of President Emmanuel Macron. This is a new mobilization in terms of its origin, scale, and forms of struggle. It all started on a small scale at the end of October 2018 with a simple citizen petition, without any party or union affiliation, posted on social networks, calling for the abolition of the fuel tax increase recently approved by the government. The yellow vests movement, however, is coming up against the worst resurgence of police violence since the Algerian war. In the face of the various protests, all demanding greater social justice, the authorities have chosen to respond with greater repression, to the extent that human rights are regressing at an alarming pace.

State of Emergency: Origins of the Crackdown

The starting point for the ramping up of repression can be clearly identified as the state of emergency proclaimed in metropolitan France on November 14, 2015 in the wake of the previous day’s terrorist attacks, and extended to the overseas departments on November 18. The security policies put in place then have forced the French people to accept a drastic curtailment of their civil and political rights. Although the state of emergency was lifted on November 1, 2017, most of the special measures it had introduced had by then acquired the force of law: preventive search and arrest, security perimeters, individual house arrest, border controls, etc., are now authorized under the Act Reinforcing Domestic Security and the Fight Against Terrorism. Since then there has been an alarming abuse of this extensive legal arsenal of emergency measures that has had the effect of pushing back public freedoms, notably the freedom of expression and freedom of assembly or demonstration, as well as trade union rights and even the right to physical integrity, all of which are now in serious jeopardy.

Those who have recently taken part in demonstrations in France have certainly witnessed what French and international human rights organizations have been decrying for the last few months: many of the actions of law enforcement agencies are disproportionate and excessively violent. They even resort at times to military weaponry. There is now systematic use of tear gas and water cannons on peaceful protesters and very frequent use of baton rounds (from riot guns, fired at head height, and other so-called less lethal weapons), stun grenades and dispersal grenades, the practice of “kettling” to prevent groups from joining up with other demonstrators, random and arbitrary arrest, verbal intimidation, gratuitous provocation, and even physical assault. The streets of Paris have seen the deployment of armored vehicles, mounted police, and K9 units. On numerous occasions, the police have inflicted degrading treatment on protesters, including minors. In many cases, people who had committed no crime whatsoeverhave been clubbed or locked up. Medical supplies have been confiscated from “street doctors”—the volunteer medics who follow the marches and treat the injured. All of these events have shocked the French, which is precisely the desired effect, with a view to halting the uprising. Such police violence is absolutely unacceptable and violates international human rights standards.

Since the election as President of Emmanuel Macron—formerly a managing partner of the Rothschild investment bank, then Minister of Finance under President François Hollande and proponent of legislation aimed at increasing labor market flexibility—French trade unions have mobilized again. Demonstrations and strikes have spread, especially across such sectors as public transportation (SNCF, Air France), energy (gas and electricity), automobile industries (Peugeot, Renault), telecommunications (Orange), mass distribution (Carrefour), health services (public hospitals, retirement homes, social security), education (high schools, universities), culture (museums), justice (lawyers, judges), garbage collection, and even financial and company auditing. These diverse social movements, which attracted a large following, lasted throughout the spring of 2018. The response by the authorities has been to step up repression, with a particularly dramatic impact on students (evacuation of campuses), environmental activists occupying “defence zones” (ZAD) and, before that, people protesting against labor-market flexibilization laws.

This was clearly part of the same spiral of repression already unleashed against the unions for several years, in violation of existing labor laws. In this direction, the obstacles to trade union activities had multiplied: paydiscrimination against trade unionists, unfair dismissal of strikers, pressure in the form of threats or disciplinary sanctions, curtailment of unionization rights and the right to strike, and even criminalization of trade unions’ action (as has been the case at Goodyear, Continental, and Air France). In addition, recent government reforms to the Labor Code have further penalized social movements, through such measures as the provision of shorter time limits for appealing to industrial tribunals and the introduction of caps on compensation awards in cases of unfair dismissal; the imposition of restrictions to the role of staff representative bodies and to the legal remedies available to them; the devising of mechanisms for breaking collective agreements without regard for job-saving plans or staff turnover; the reversal of the hierarchy of norms so that company agreements prevail over sectoral agreements and the law; the establishment of nationwide workplace termination for economic reasons to facilitate the dismissal of employees in French subsidiaries, while the parent company makes profits on a global scale.

Phase 2: Suppression of the Yellow Vests

President Macron has decided “not to change course”. Without any regard for the suffering and expectations of working men and women, his government is tightening up its neoliberal policies and, moving ever further down the route of social violence and police repression. The record is horrific, unworthy of a country that claims to be democratic and tolerant. Since the start of the yellow vest movement, there have been 11 accidental deaths. More than 2,000 people have been injured, at least one hundred very seriously, with doctors reporting injuries they describe as “war wounds” (i.e., hands torn off, eyes put out, disfigurement, multiple fractures, and maiming), mainly resulting from baton rounds or shrapnel from grenades often fired against peaceful protesters. Several people are still in a coma. And what of the psychological shock to teenagers treated as terrorists by the police, forced onto their knees with their hands behind their heads, or bundled into vans or cells?

Where is this power heading, trampling as it does on its own people and unleashing such levels of violence? On December 1, for example, 7,940 tear gas grenades were fired, along with 800 dispersal grenades, 339 GLI-F4-type grenades (explosive ordnance), 776 baton rounds and 140,000 litres of water. According to preliminary and likely incomplete estimates, just between November 17, 2018, and January 7, 2019, 6,475 arrests were made and 5,339 people were taken into police custody. Nationwide, more than 1,000 convictions have been handed down by the courts. Although most of the sentences are subject to adjustment (such as community service), many result in prison terms: for example, 153 committal orders (involving incarceration) have been issued, while 519 summonses have been put out by the criminal investigation police and 372 by the criminal courts. In Paris, 249 people have been arraigned for immediate trial, 58 have received prison sentences and 63 suspended prison sentences. In the French department of La Réunion, the average prison term imposed on local yellow vests is 8 months. As of January 10, 2019, some 200 people involved in these events were still imprisoned in France.

In many respects the demands of the yellow vests intersect with those of labor movements. They demand immediate and tangible improvements to living standards, the restoration of purchasing power (wages, pensions, social benefits), the strengthening of public services, and citizens’ participation to decisions concerning their collective future. In other words, they demand the implementation of economic, social and cultural rights, and peoples’ rightto self-determination. Insofar as they call for greater social justice, increased respect for human rights, and more economic and political democracy, these claims are legitimate and attract broad support among the population.

The mother of all violence, the one that has to be halted as a matter of urgency, the one from which people are forced to defend themselves—as suggested by the Declaration of Human and Citizens’ Rights in the preamble to the French Constitution—is the violence generated by the imposition of unjust, merciless, antisocial, and undemocratic neoliberal measures; the violence that, in the silence surrounding the price movements of capitalist markets, causes homeless people to die of cold, pushes indebted farmers to suicide, and destroys individuals and families by depriving them of jobs, cutting off their electricity and evicting them from their homes; the violence that forces pensioners to turn off the heating, or children to skip a meal, because they can’t afford it; the violence that breaks down all solidarity, that closes schools, maternity wards, and psychiatric hospitals, that plunges small tradesmen and craftsmen into despair as they buckle under their overheads, that wears out wage workers but does not let them make ends meet. The real violence is there, in this extraordinarily unjust and fundamentally untenable system. In that light, the smashing of bank or supermarket windows by a few isolated or confused individuals, while certainly reprehensible, is no justification for police violence.

Update: Until mid-March, 11 people lost their lives, including five “yellow vests”. Most deaths are related to road accidents, two are due to heart problems. An octogenarian also lost her life in Marseille after being hit in the face by a tear gas grenade as she was closing the shutters of her apartment. For four months (from November to March), there have been many injuries during the demonstrations. According to the figures given by the Secretary of State at the Ministry of the Interior, as of March 7, 2019 the injured were 2,200 on the side of the demonstrators and 1,500 on the side of the police. In front of the Senate, the president of the parliamentary group CRCE (Communist, Republican Citizen and Ecologist), Eliane Assassi, has provided the figures of “206 head injuries, including several dozens of LBD shots [defensive ball launchers]”, and “22 people ravaged by these shots” on the side of the protesters.

* Rémy Herrera (https://www.workers.org/author/remy-herrera) is a researcher at the Centre National de la Recherche Scientifique (CNRS), Paris. Article written by the author in January 2019 and used as the basis of a written statement submitted by the Centre Europe – Tiers Monde (CETIM, a non-governmental organization in general consultative status) to the United Nations Human Rights Council in Geneva for its fortieth session on 25 February–22 March 2019. Agenda item 4 ‘Human rights situations that require the Council’s attention’. Distribution on 15 February 2019 by the Secretary-General in accordance with Economic and Social Council resolution 1996/31 [final report available on the UN website, ref.: A/HRC/40/NGO/56]. Translated by the Centre Europe–Tiers Monde, edited by SJ.