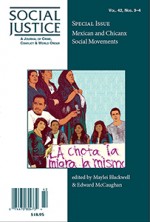 This special double issue brings together the work of scholars and activists from Mexico and the United States, representing a variety of disciplines and movements, to discuss current trends in the scholarship and practices of Mexican and Chicanx social movements. The editors sought to critically assess new developments in the social movements of “Greater Mexico.” The volume incorporates a multigenerational conversation between left activists and scholars of the 1960s and 1970s and later generations of activists, including those in current movements. It pays attention to the multiple modes of power and possibility produced by movements and analyzes how power is organized around racial, classed, sexual, and gendered axes within society and within social movements. Articles reveal how youth organizers in the immigrant rights movement and the Oaxacan popular uprising challenged the way of doing politics, leading to important innovations in social movement strategies and outcomes. The issue also investigates the ways in which indigenous women are asserting gender rights within indigenous rights and how queer activists have challenged immigrant rights organizing.

From the Barrio to the Barricades: Grafiteros, Punks, and the Remapping of Urban Space
Maurice Rafael Magaña

Shine Bright like a Migrant: Julio Salgado’s Digital Art and Its Use of Jotería
Juan D. Ochoa

Arizona: A Reflection and Conversation on the Migrant Rights Movement, 2015
Michelle Téllez

Be the first to review “Vol. 42-3/4: Mexican and Chicanx Social Movements” Cancel reply