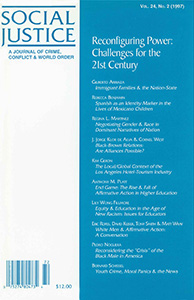 This special issue addresses the reconfiguration of power by transnational corporate, worker, and community interests. The language, identity, civil rights, and equity concerns of immigrants, youth, women, and people of color are examined in light of their respective movements, and the possibilities for alliances and the role of affirmative action are the subject of lively debates. Among the challenges for the 21st century are dramatic demographic shifts. California will become a majority minority state in the year 2000, a state where no one racial group holds a majority. Will powerful forces there lean toward an apartheid model or toward a state where the majority rules and seeks out ways to combine peace and social justice? Will groups struggle to build alliances, or will they compete with each other for jobs and contracts in the transnational, global marketplace? Will they scapegoat one another for social ills, or cross borders of mainstream representations and individual and group identities to form new sources of power and resistance to unjust forms of the New World Order(s)? What will be the legacy of the post-Civil Rights Era backlash manifested in reactionary, racist, and violent laws aimed at subverting the effects of extending the democratic project to groups of people who have been historically discriminated against and excluded from the provisions of American democracy? These are among the many dilemmas addressed in this issue.

Gilberto Arriaza, Grace Under Pressure: Immigrant Families and the Nation-State

Lily Wong Fillmore, Equity and Education in the Age of New Racism: Issues for Educators

Pedro Noguera, Reconsidering the ‘Crisis’ of the Black Male in America

Bernard Schissel, Youth Crime, Moral Panics, and the News: The Conspiracy Against the Marginalized in Canada