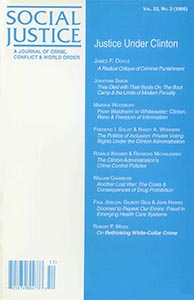 This special issue of Social Justice was conceptualized during the early debates about the likely impact of Bill Clinton’s administration on justice in the United States. The plan was to assemble articles that would assess what was happening in various public policy areas under the leadership of the Clinton administration and that would speculate on at least the near-term trajectory for social justice in the United States. The issue is divided into three sections. The first addresses “The Social Philosophy of Punishment,” the second “Access and Openness,” and the third, “Crime and Justice.”

Jonathan Simon, They Died with Their Boots On: The Boot Camp and the Limits of Modern Penality

Marsha Woodbury, Clinton, Reno, and Freedom of Information: From Waldheim to Whitewater

Frederic I. Solop and Nancy A. Wonders, The Politics of Inclusion: Private Voting Rights Under the Clinton Administration

Ronald Kramer and Raymond Michalowski, The Iron Fist and the Velvet Tongue: Crime Control Policies in the Clinton Administration

William Chambliss, Another Lost War: The Costs and Consequences of Drug Prohibition