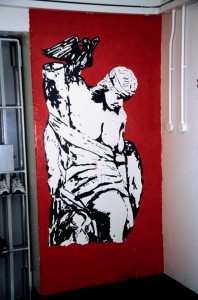 With state prisoners in California and detained immigrants in Seattle using the hunger strike as a form of protest, what can we learn from prisoners in Northern Ireland who used hunger and art as weapons of resistance during “The Troubles”?

Resistance to colonial rule in the 18th and 19th centuries ensured that generations of Irish political leaders ended up in prison. As a result, prisons inevitably became key sites for further resistance. On one side were the prisoners who saw themselves as legitimate political activists. On the other was the British state. After the partition of the country, the two Irish states normally viewed them as criminals or felons or, latterly, terrorists.

The clearest example of this confrontation was during the most recent period of conflict in Northern Ireland. Between 1971 and 1976, hundreds of prisoners from republican (pro-united Ireland) and loyalist (pro-British) backgrounds were incarcerated in compounds where they wore their own clothes, had free association, and maintained their military structures; they were recognized as political inmates.

In 1976, the British government announced that politically motivated sentenced prisoners were henceforth to be treated as regular criminals. Republican prisoners in particular rejected this change of policy and set the pace in terms of resistance, refusing to wear the prison uniform and being clothed solely in towels and blankets; they became known as “blanket men.” Eventually the protest escalated into a no-wash protest and then in 1981, a hunger strike in which 10 republican prisoners starved to death. The hunger strike ended inconclusively, but within a few years political status was eventually returned in all but name and the organization of each of the prison blocks came under the control of an OC (officer commanding) of the military group concerned.

The prisoners in effect ran the wings of the prison as quasi-liberated zones. Republican prisoners in particular refused to see imprisonment as a hiatus in political struggle and instead viewed their resistance as an attempt to appropriate power and thereby to prepare for power after prison. Loyalist prisoners also saw themselves as prisoners of war, but as pro-state militants who identified with the greater system of power in the society; although disagreeing with their imprisonment, prison resistance came less easily to them. However, the benefits that the republicans gained through their resistance came to be enjoyed by loyalist prisoners as well.

Throughout these twists and turns, education, broadly defined, in the prison went through a number of phases. In the early 1970s, there was no formal education available. Inmates engaged in leather and woodwork, producing belts, wallets, and miniature harps decorated with Celtic imagery. In addition, both loyalist and republican prisoners had intricate self-education regimes that involved military and weapons instruction, history classes, and political development. Republican prisoners focused on the history of Ireland and of republican struggle. Classes were run in a hierarchical and didactic fashion and there was little official encouragement to study external political struggles or philosophies, such as Marxism. 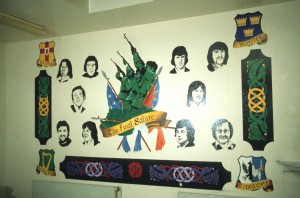 IRA mural, portraits of 10 hunger strikers who died in prison in 1981

During the blanket protest and the hunger strikes, there was no possibility of formal education. But the deprivations of living naked except for a blanket, on 24-hour lockup without washing facilities, two to a cell whose walls were smeared with their own excrement, and where the only material objects were a mattress and such contraband as they were able to smuggle in paradoxically became in a very intense sense a liberation. Without books, newspapers, radios, cassette players, or computers, republican prisoners turned to one inalienable resource: oral culture. They gathered in the evenings close to their cell doors and shouted down the wings to their comrades. They told stories, taught each other Irish, and had political discussions. Unlike previously, the form of education was now collective rather than hierarchical, informal but highly effective. In their own way and through necessity the prisoners had discovered a form of education that was more Paulo Freire than Vladimir Lenin.

Although some loyalist prisoners also sought the return of political status by going on a blanket protest for a time, they did not endure the mass and sustained experience that republicans had. Consequently, they did not develop equivalent techniques and attitudes to a liberationist form of self-development.

Republican prisoners carried over the lessons learned during the blanket protest to the post-hunger-strike period in the late 1980s and early 1990s. Beyond involving themselves in formal education courses, they continued their self-education program through collective and egalitarian methods. They also built up an impressive library where they could read about political struggles elsewhere, socialist and Marxist ideas, women’s liberation, etc.

In this period, the OC for each wing was the only person who could deal directly with the prison authorities. For their part, the authorities rarely ventured into the wings and then usually by prearrangement with the OC. Despite confinement, the republican prisoners had retrieved a relatively liberated space, which they used to full advantage in many ways, including planning what became the largest prison escape in post-war European history in 1983. They exploited the space culturally as well. They produced a regular discussion journal, a CD of republican songs, and an oral history of their experiences during the no-wash protest and hunger strike, all of which were sold outside. 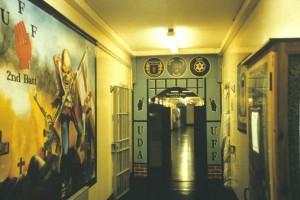 UDA wing, showing mural of avenging loyalist and other emblems

For their part, the loyalist prisoners meticulously re-created the paraphernalia of military marching bands popular on the outside—uniforms, drums, and bannerettes—out of cardboard and cloth, and paraded in the narrow confines of the prison corridors playing music. In addition, all the political groups painted political murals.

In the IRA (Irish Republican Army) wings, there were murals on a relatively wide range of themes. By far the most common was Celtic mythology. Next in terms of quantity were memorial murals, including portraits of the 10 hunger strikers who had died. A number of historical murals depicted the republican Easter Rising in Dublin in 1916. Other murals were on international themes, including the plight of Native Americans. Che Guevara was depicted, as were Steven Biko and Oliver Tambo. Finally, there were murals in support of the Irish language, especially on the one wing where all the Irish-speaking prisoners were housed.

The most common theme in the INLA (Irish National Liberation Army) murals related to Irish history, in particular the original republicans, the United Irishmen, of the late 18th century. Portraits of dead INLA leaders, dressed in military-style black berets, were also common. Cuchulainn and Che Guevara were also depicted.

The predominant theme in the UDA (Ulster Defence Association) wings was the military activity of their organization. The most striking of these murals depicted Eddie, the mascot of heavy metal group Iron Maiden. Portrayed as a loyalist, he strode through a wasteland past crosses bearing the names of republican political parties. Behind him stood the Grim Reaper. Other murals commemorated dead comrades. 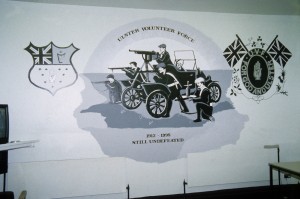 In their wings the UVF (Ulster Volunteer Force) painted on two main themes: the military activities of their organization and memorials to dead comrades. Other murals depicted the turbulent period at the start of the 20th century, when the original UVF was formed to oppose Home Rule for Ireland and later joined the British Army and was slaughtered at the Battle of the Somme in 1916.

Most of the murals in the LVF (Loyalist Volunteer Force) wing were quite small representations of loyalist flags. The most prominent mural was a portrait of LVF founder Billy Wright, who was killed in prison by the INLA.

While each group of murals mirrored their equivalents in loyalist and republican areas outside the prison, the overlap was most obvious in relation to the loyalist murals; the predominant theme inside and outside the prison was the valorization of the armed activity of the respective military groups.

Republican muralists inside the prison and outside had more scope for artistic imagination. History, myths of origin, international struggles and heroes, current affairs—all these could be translated into pictorial messages. Hence, the republican prison murals overall, and the IRA murals in particular, had much less stress on armed activity.

The INLA prison murals were the most likely to depict guns and gunmen. But the INLA and the IRA prison murals were stronger on historical themes than the loyalist murals, and much stronger in relation to mythology. Similarly, there was a stark difference in relation to international references, with loyalist murals having none and republican murals, particularly IRA murals, having many.

These murals were clearly about political identity and the expression of that in alien circumstances. But there was much more involved. As politicized prisoners, republicans and loyalists, and particularly the former, were intent on maintaining their political beliefs and organization as a challenge not just to the system of imprisonment but to the wider system of power that gave rise to their imprisonment in the first instance. In the battle for control, cultural artifacts such as the murals became a sign and means of the prisoners’ appropriation of space and power. Thus, the painting of murals was not simply art, but resistance.

The groups listed below had prisoners in Long Kesh, separated in their own wings. All painted murals.

IRA—Irish Republican Army. With roots in insurgency against British rule in Ireland in the 19th and early 20th centuries, this organization reformed in 1969 and was the main republican military organization from then through until the ceasefire of 1994. Seven of the 10 hunger strikers who died in Long Kesh prison in 1981 belonged to the IRA.

INLA—Irish National Liberation Army. This group was formed in 1974 with the goal of establishing a socialist republic in Ireland, free from British rule in the northeastern six counties. It was militarily active until 1998. Three of the 10 hunger strikers who died in Long Kesh prison in 1981 belonged to the INLA.

UVF—Ulster Volunteer Force. Formed in the mid-1960s, this group saw its goal as twofold: military opposition to republican insurgency and the maintenance of Northern Ireland as an integral part of the United Kingdom. It declared a ceasefire in 1994.

UDA—Ulster Defence Association. This military organization was formed in 1971 as a self-defense group for loyalist working-class areas, especially in Belfast. It later developed into a large organization with goals similar to that of its smaller rival, the UVF. The UDA declared a ceasefire in 1994.

LVF—Loyalist Volunteer Force. Formed in 1996 as a breakaway from the Ulster Volunteer Force, this small group claimed to combat republicanism, but in fact targeted nationalist civilians. It imploded in feuds around the year 2000.

* Bill Rolston is an emeritus professor at the University of Ulster, Northern Ireland, where he was previously Professor of Sociology and Director of the Transitional Justice Institute. For a more in-depth discussion see “Prison as a Liberated Zone: The Murals of Long Kesh, Northern Ireland,” State Crime 2(2) 2013: 149–72.