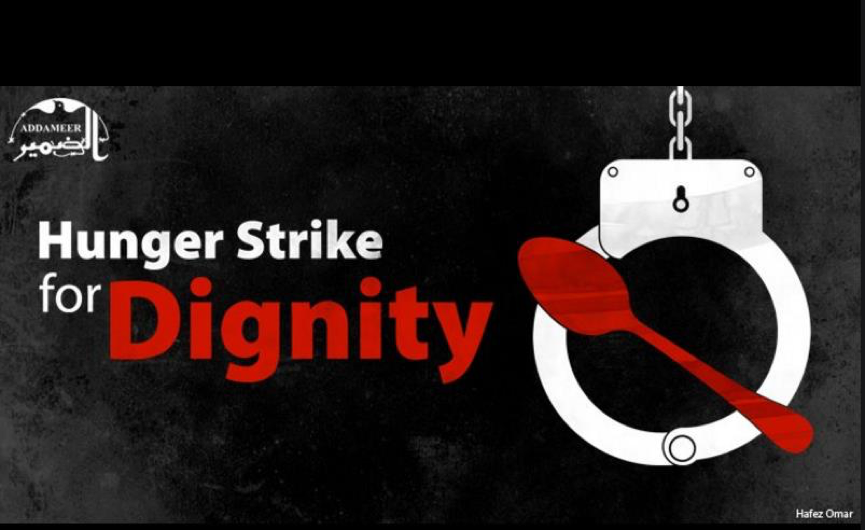 Amidst President Trump’s visit to Israel this Monday, a Palestinian general strike of three hours and clashes with Israeli military forces were meant to express Palestinian Solidarity with hunger striking prisoners and help achieve their demands. Few prisoners’ mothers also declared a hunger strike. As President Trump left the Middle East after a visit of only one hour to the West Bank, the strike continues, entering its sixth week, with 150 prisoners taken for medical examinations. Israel prevents Members of Parliament from visiting striking prisoners and limits lawyer’s visits.

The hunger strike of Palestinian prisoners in Israeli prisons is both a just demand to reinstate dignifying imprisonment conditions and a powerful political protest against the ongoing Israeli occupation of the Palestinian territories. These are two very good reasons to support the reasonable, realistic, and just demands of the prisoners. The strike of over 1,500 prisoners commenced on April 17th—Palestinian Prisoners’ Day, when Palestinian society honors thousands of its members behind Israeli bars. Palestinian society has been under mass incarceration for five decades. Since the occupation of 1967, an estimated 800,000 Palestinians—roughly 20% of the population—has been imprisoned by Israeli authorities. Today, Israel holds approximately 6,300 Palestinian prisoners, of which an estimated 500 are held in administrative detention, without charge. Nearly every family in the West Bank and Gaza Strip has experienced a member’s detention or incarceration.

There is a political context to this mass incarceration. Imprisonment is one of the main ways in which Israel confronts the ongoing resistance to its military control of the Palestinian territories. This resistance, the Palestinian demand for self-determination, and the Israeli conquest and de-facto annexation of these territories are all political. In this sense, Palestinian prisoners are political prisoners. The traditional understanding of this term is related to people imprisoned for voicing their political beliefs in nonviolent ways; but violence is also political, and it is not produced and perpetrated by only one side of this bloody conflict. See for example the UN General Assembly Resolution no. 3103 (1973) stating “Basic Principles on the Legal Status of the Combatants Struggling Against Colonial and Alien Domination and Racism Regimes,” which recognizes that the struggle for self-determination and independence is “legitimate and in full accordance with the principles of International law.” Whereas not all instances of Palestinian violent resistance may be seen as legitimate, the Israeli position that labels all Palestinian acts—violent and nonviolent—as “terrorism” is untenable and is meant to depoliticize the discussion. Palestinian prisoners are political prisoners since their incarceration is generated within and as a result of a political struggle.

And indeed, Israel treats Palestinian prisoners as a collective and not as individuals. Almost all Palestinian prisoners are categorized as “security prisoners” (as opposed to “criminal prisoners”), a category bundling together perpetrators of murderous attacks on civilians with political leaders, stone-throwing youth, protestors, and community organizers. Israel maintains the impossible position that Fatah is still a terrorist organization, even following the Oslo Accords that the government signed with the same organization’s representatives. This enables the criminalization of Fatah activists and leaders. All of these prisoners are collectively deemed security threats and afforded harsh imprisonment conditions, which are often contoured for political gain or to meet vindictive popular demand (real or imagined). In 2011, Israeli Prime Minister Benjamin Netanyahu decided to halt the academic studies of all Palestinian prisoners (with the Israeli Open University) in retaliation for the conditions under which Hamas held the Israeli captive soldier Gilad Shalit. He was quoted saying: “[T]here will be no more ‘doctors for terror’, this celebration is over.” Gilad Shalit was soon after released and has most probably graduated college by now, but all Palestinian prisoners still cannot obtain academic education while serving their sentence. Many of the demands presented by the prisoners now aim to reintroduce conditions that were in place for years and were gradually withdrawn after 2000 with the failure of the peace process, the reelection of a right-wing government, and the advent of the second Intifada.

The hunger strike must be understood, then, on two interconnected levels. First, it is an organized political protest over Israeli policies generally. This aspect was stressed in the New York Times article by Marwan Barghouti, a prominent political figure and the leader of the current hunger strike. Second, it is a concrete struggle by prisoners over their collective imprisonment conditions. The full list of demands, as published by the NGO Palestinian Prisoners’ Club (Nadi al-Aseer) can be summed up under several categories: contact with families, medical treatment, conditions during prisoners’ transportation, imprisonment conditions, ending solitary confinement, ending administrative detentions, and prisoners’ education.

Until 2002 all family members were allowed to visit, but then visits were restricted to first-degree relatives (parents, siblings, and children), which prevents prisoners from seeing the spouses of their children and siblings as well as their grandchildren, even as babies. Israel imprisons Palestinians inside Israel, which enables the security services to deny entry permits from family members living in the West Bank and Gaza. The transfer of prisoners from the occupied territories to Israel is unlawful under the Fourth Geneva Convention, article 76: “Protected persons accused of offences shall be detained in the occupied country, and if convicted they should serve their sentences therein.” The denial of entry permits from prisoners’ family members makes clear why this rule is so necessary. Concerning education, prisoners are demanding to reinstate academic studies and to allow prisoners (mostly minors who wish to continue their schooling) to take the Palestinian matriculation exams, which they were allowed to do in the past.

No prisoner would go on a hunger strike unless they felt there was hardly anything to lose and much more to be gained, including their dignity. The willingness of prisoners to risk their health and lives changes the balance of power between the prisoners and the prison authorities. Suddenly, prison authorities have a lot to lose, and they are forced to negotiate with the prisoners (even when negotiations are denied). Negotiations are often conducted directly by the Israeli General Security Service (GSS or Shabbak). This is why Palestinian prisoners’ hunger strikes have been very effective, especially in areas where the law has constantly failed them: solitary confinement and indefinite detention. In 2012, a collective hunger strike achieved something amazing: dozens of Palestinian prisoners (all but two) were taken out of solitary confinement. Prior to that, I represented a number of Palestinian prisoners who were held in solitary confinement for over five years. All our efforts to end their confinement in the courts failed. Following the strike, all of these prisoners were taken out of confinement. Individual strikes of administrative detainees, like Khader Adnan and Samer Isawi, succeeded in ending their indefinite detentions.

This strike is different from past ones for at least two reasons. First, it is led by Fatah, the dominant party in the Palestine Liberation Organization (PLO), which heads the Palestinian Authority. This makes it particularly powerful, for it speaks for the Palestinian “mainstream” and is supported by an unprecedented number of prisoners, led by a popular political figure like Marwan Barghouti. Second, this is the first collective strike waged after the Israeli government enacted a law in 2015 that allows hunger-striking prisoners to be force-fed. Having noticed the success of hunger strikes, the government decided to try and end this “celebration” as well. The Bill was titled “Prevention of Medical Damage to a Prisoner on Hunger Strike,” but its actual purpose is to prevent the damage that the hunger strikes cause to the government. Whereas adequate and ethical medical treatment is already provided for in the Israeli Patient Rights Law, this law transfers the decision on treatment of hunger-striking prisoners from medical professionals to a district judge, who is instructed to consider not only the will and best interest of the patient, but also “fear for human lives and well-grounded fear for serious damage to national security.” The Israeli Medical Association and individual Israeli doctors have demonstrated impressive resistance to this law, arguing that it is against medical ethics and allows for torture; and although judges can order force feeding, they are not the ones to perform it. It remains to be seen, then, if judges and doctors will be courageous enough as this hunger strike continues.

As Israeli government and security service are negotiating to end the strike, international and US public opinion should clearly support the concrete demands of the prisoners. But such accomplishments tend to erode over time. Even after this strike ends, we should continue and support the ultimate end not only of the Israeli occupation but also of the imprisonment of Palestinians within the Occupied Territories, as well as the decriminalization of the Fatah organization and of all nonviolent political and social activities.

*Smadar Ben-Natan is currently a visiting scholar at UC Berkeley, Center for the Study of Law and Society, and a PhD candidate at Tel-Aviv University. Her research centers on enemy prosecutions in military and civilian courts. She has been a practicing lawyer for eighteen years, representing many Palestinian prisoners.