This is a time of fiscal austerity, when governments are cutting back their spending and asking Canadians to assume responsibility for the shortfall. Questions are being asked about how publicly funded institutions are being held accountable for how they manage the financial resources entrusted to them for the delivery of their services. On the heels of the fatal shooting of Sammy Yatim by Constable James Forcillo of the Toronto Police Service, such questions are currently being posed by Alok Mukherjee, Chair of the Toronto Police Services Board. 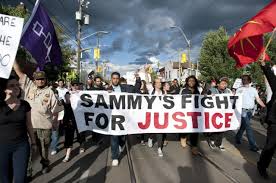 Eighteen-year-old Yatim was on a Toronto streetcar on July 27, 2013, reportedly brandishing a knife, when he was shot and killed. He displayed the appearance and behavior of someone who may have been mentally ill; no evidence has been adduced to support this notion. But, regardless of any mental health issues he may or may not have had, the nine gunshots fired before a police Taser was deployed amounted to excessive use of force. Nevertheless, his death has dredged up memories of police killings in which the suspects may have had mental health issues.

Mukherjee has suggested changes to Ontario’s Police Services Act that would empower chiefs of police (in concert with police services boards) to discipline, fire, and/or suspend officers without pay. At the heart of Mukherjee’s concern is whether suspended officers involved in cases of discreditable conduct causing serious personal injury or wrongful death should receive pay while being investigated for their role and involvement in these incidents. He has therefore cast doubt on whether suspending such officers with pay is the most effective use of taxpayers’ money. He has not addressed this concern directly, but his suggested legislative changes speak volumes.

Police union leaders may abhor the idea, but the fact that this issue is being openly discussed at all is significant. I would like to broaden the discussion to include substantiated cases of racial profiling by police. My interest is not to compare the death of Yatim to someone being unfairly targeted because of their skin color or race. But, as in the Yatim case, any talk of legislative reform to the provincial Act that regulates police work in Ontario must consider police misuse of their discretion. The cumulative effects of discrimination based on skin color or race can have negative physical and psychological effects—and even deadly consequences—for those targeted. Racial profiling is an abuse of police power and authority, and perpetrators, when shown to have engaged in such practice, must be made to bear the consequences of their actions. In Québec, two officers from Longueuil were accused of racial profiling and a police ethics commission ordered them to be suspended without pay; but this is not a likely outcome in Ontario, where neither the chiefs of police nor their respective police boards can recommend or fire an officer for transgressions related to racial profiling. Amendments to the Police Services Act would address this concern and accord with the demands of the very citizenry the police exist to serve and protect.

In Ottawa, the police service currently is collecting race-based data on motorists involved in traffic stops. The data are being collected as a term in a racial profiling settlement between the police services board and the Ontario Human Rights Commission in the case of Chad Aiken. At the Let’s Chat About Racial Profiling forum organized by the police services board in 2010, members of racialized communities expressed their views on the need for changes to how police officers are disciplined for acts of misconduct. Overwhelmingly, their reaction suggested little appetite for expedient public-relations efforts that are weak on meaningful disciplinary actions.

Recently, Chief Bordeleau of the Ottawa Police Service tried to make his views known on this matter, although not always clearly. In a July 2013 news report, he was candid about having the power to suspend officers without pay when they have been charged with criminal offences while off duty, a position in accordance with that of the Ontario Association of Chiefs of Police (OACP). But during a Q & A with the Ottawa Citizen’s editorial board, when he was asked if the police services legislation needed to change to make it easier to discipline officers, his response was less than clear: “Well, it’s the case law that exists. . . . You can’t change the discipline that’s already been handed down . . .  Administrative tribunal and hearing officers are bound by decisions that are made.” However, administrative tribunals, unlike courts of law, are not bound by the principle of stare decisis, in which legal decisions are made based on principles established by decisions in earlier cases. The Chief’s lack of clarity is revealing.

Two different positions emerge from the ongoing debate. For Mukherjee, tougher disciplinary sanctions are needed in cases where an officer faces potential suspension for alleged disreputable actions committed in the line of duty. This contrasts with Chief Bordeleau’s views, and by extension the OACP’s, whose concern is to suspend officers without pay who have been charged with criminal offences while off duty. The latter position could, in effect, overlook cases where an officer engages in racial profiling in the performance of duty.

In the race to turn public outrage over Yatim’s shooting in favor of the police, care should be taken to ensure that police actions align with the expectations of the public, and that legislative and policy reform goes beyond arming all frontline police officers with Tasers. The tragic but needless murder of Yatim presents an opportunity for robust policy action that would help prevent not only officer-involved shooting in situations like Yatim’s, but also the practice of racial profiling by police.

*Sulaimon Giwa is a PhD candidate in the School of Social Work at York University. He was the coordinator for Community Policing: A Shared Responsibility (2006–2008), a project that received funding from the Department of Canadian Heritage to address racism and racial profiling in policing in Ottawa. He can be reached at sol.giwa@gmail.com.