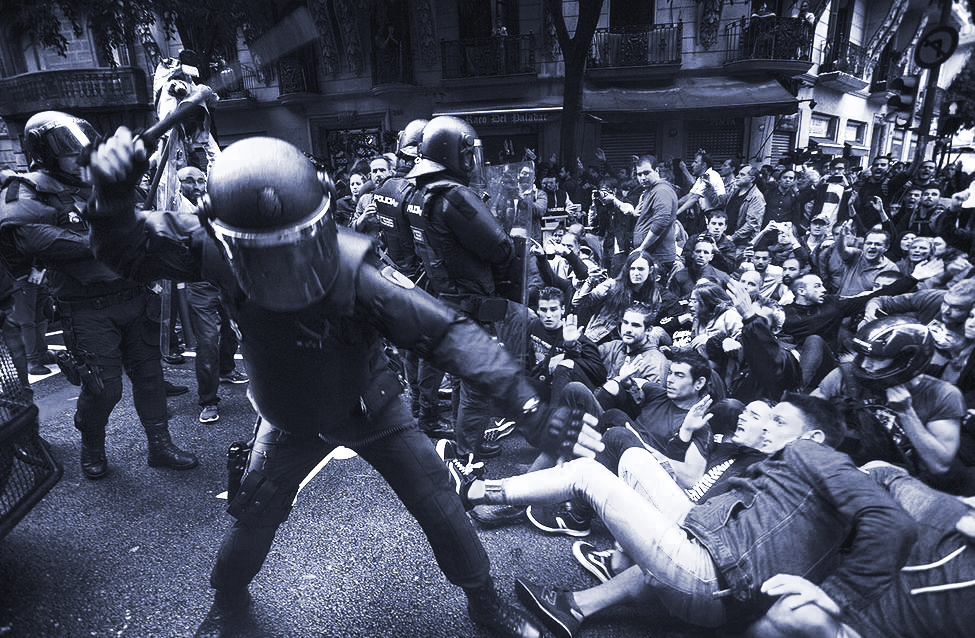 Spanish conservatives have not ever been interested
in winning over their political contenders,
they are just interested in defeating them.
Guillem Martínez, journalist and writer

The resurgence of the Catalan independentist movement, recently culminated in a successful referendum for independence and its subsequent overturn by the central government of Spain, cannot be disconnected from the austerity period launched by the European Union (EU) in May 2010. A significant number of European countries has witnessed a conservative turn in recent years, featuring the electoral success of right-wing and authoritarian-populist political formations. By contrast, the southern European nations hardest hit by the Great Recession have taken a very different path. In 2015, immediately after the two electoral victories of the left-wing coalition Syriza in Greece, a promising progressive government came into office in Portugal. In Spain, the new left party Podemos gained substantial traction in 2014–15, which led to the electoral success of Podemos-like coalitions in a number of key local administrations—including Madrid and Barcelona—after the municipal elections of May 2015. The Catalan pro-independence movement took center stage especially since 2012, when the newly elected conservative government of Mariano Rajoy started to implement extremely harsh austerity measures. Therefore, the Catalan movement should be regarded, at least in part, as a reaction against the conservative and “austericide” measures promoted by Rajoy’s right-wing Popular Party (PP). This is unsurprising, since Catalonia has been—at different historical conjunctures—a stronghold of anarchist, leftist, and anti-dictatorship political movements. 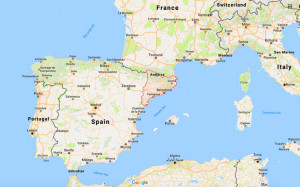 But this is only one side of the story. For many centuries, Catalonia has cemented a strong national identity. Indeed, Catalonia’s secession from Spain had been set forth at least three times before, the most recent one in October 1934. In all three cases, Catalonia’s independence bid was militarily crushed by Spanish rulers. Yet, despite this long-standing separatist tradition, the current pro-independence uprising would not have taken hold without the salient window of opportunity offered by Rajoy’s autocratic and intolerant political stance. Indeed, while the pro-independence campaign was gradually gaining momentum, the central government rejected any negotiation with Catalan elected officials. In 2006, Rajoy’s PP brought the reform of the Statute of Autonomy of Catalonia before the Constitutional Court, which overturned this pivotal amendment in 2010. The first attempt to hold a referendum for self-determination, which took place in November 2014, was boycotted by the Spanish government and led to the criminal prosecution and conviction of the then Catalan president and two top-rank officials. Subsequently, the Spanish government adopted the current hard-line position in early September 2017, with the referendum for independence set to be held on October 1. The consequences of the government’s authoritarian stance are well known: the deployment of 12,000 Spanish police officers throughout Catalonia, the heavy-handed policing of voters and activists on the day of the referendum, the suspension of Catalonia’s self-government prerogatives, and the onset of penal repression against pro-independence leaders.

In order to justify its imposition of direct rule in Catalonia, the Spanish administration has resorted to a highly controversial section of the Spanish Constitution (Article 155), which states that any autonomous community must fulfill its obligations to the Spanish state or risk having its powers taken away. Despite the very feeble constitutional legitimation of this political move, on October 28 Rajoy’s cabinet ousted the Catalan government and around 1,400 Catalan officials, dissolved the Catalan parliament, and called for new regional elections to be held on December 21, 2017.

Even more concerning is the penal dimension of this conundrum. Around 20 Catalan political and civic leaders have been indicted for two quintessentially nineteenth-century political crimes: rebellion and sedition. This indictment threatens Catalan officials with close-to-lifelong prison sentences. Two civic leaders of the pro-independence movement, Jordi Sànchez and Jordi Cuixart, have been imprisoned on remand on October 16, following an unambiguously politically motivated decision. In recent days, a significant part of the Catalan government moved to Brussels and does not intend to return to Spain until their right to due process is reinstated and protected. On November 2, the rest of the ousted government, with the only exception of one member who had resigned before a pro-secession parliamentary vote in late October, were sent to prison without bail. Of course, no charges have been pressed against Spanish officials for their disproportionate use of state coercion.

The pro-independence movement has undoubtedly made serious political mistakes—crucial among them, an unrealistic proclamation of independence without the support of a widespread democratic base. From a radical social justice and human rights perspective, though, this is not the most critical point. The eventual scenario in which part of the ousted Catalan cabinet may apply for political asylum in Belgium points to other political aspects of the current conflict, the most significant of which is arguably related to the content and scope of a democratic regime in twenty-first-century Europe. Concretely, these recent events raise the question of why and to what extent a legitimate political claim—which was peacefully and democratically debated in countries such as Scotland and Quebec in the recent past—may be addressed within a European jurisdiction as a law enforcement and criminal justice issue. Two interpretative lenses may provide an answer to this dilemma.

First, the unstated values and long-standing inertias of the Spanish political regime should be taken into account. According to mainstream ratings such as the World Bank’s Worldwide Governance Indicators, Spain represents what may be defined a “regular” European democracy. Based on indicators measuring the prevalence of the rule of law, political stability, and political accountability, Spain ranks lower than the major EU nations and Portugal, but higher than other Southern European countries such as Greece and Italy. Yet, this perspective is somewhat distorted. In international assessments on the effectiveness of human rights against penal repression (see www.politicalterrorscale.org; www.humanrightsdata.com), Spain features either the worst or second-worst record of all EU jurisdictions in key areas such as political imprisonment. As a manifestation of a persistent Schmittian political mentality, Spanish hegemonic elites have time and again claimed the existence of “internal enemies” (nowadays located in Catalonia) to legitimate the transformation of political conflicts into penal issues. These authoritarian tendencies have also targeted social movements. For example, in the mid-1990s more than 1,500 anti-military activists were jailed for advocating the abrogation of military conscription. Today, Spanish courts are indicting and convicting hundreds of people for speech crimes allegedly perpetrated via social media. In short, Spain is to a great extent an effective embodiment of what Michel Foucault defined sovereign governmentality—that is, a technology of power that essentially rules through the law, the stipulation of prohibitions, and the enforcement of punishments.

Secondly, the dilemma mentioned earlier may be addressed by taking into account the conservative surge throughout Europe. Spain has been widely considered as an exception within the European political landscape, since it has not witnessed the consolidation of electorally successful far-right political parties. Yet, such conclusion would be misleading, since it fails to understand the meaning of authoritarian politics in Spain. The measures taken by the Spanish government are strikingly inadequate to address the Catalan question, but this is not what is at stake. Spanish power elites do not seek to win this particular political battle; rather, their actions aim to produce enduring deterrent effects that may prevent any type of political challenge in the future. In fact, the Spanish government’s measures may be especially suitable to generate a persistent downgrading of the democratic system, thereby restricting the scope of political discussion and intervention. The Spanish administration has set out to join the conservative turn affecting Europe and several other regions of the world (namely, the United States and several South American countries), articulating it with the neo-authoritarian turn that frequently haunts late-democratization polities. The incarceration of a large number of Catalan political leaders lays bare that the authoritarian brink is closer than ever.