Editor’s note: As a complement to the following blog, see the in-depth analysis of neoliberal economic change and authoritarianism in Mexico by Job Hernández Rodríguez in “Latin America Revisited,” Vol. 40-4 of Social Justice. 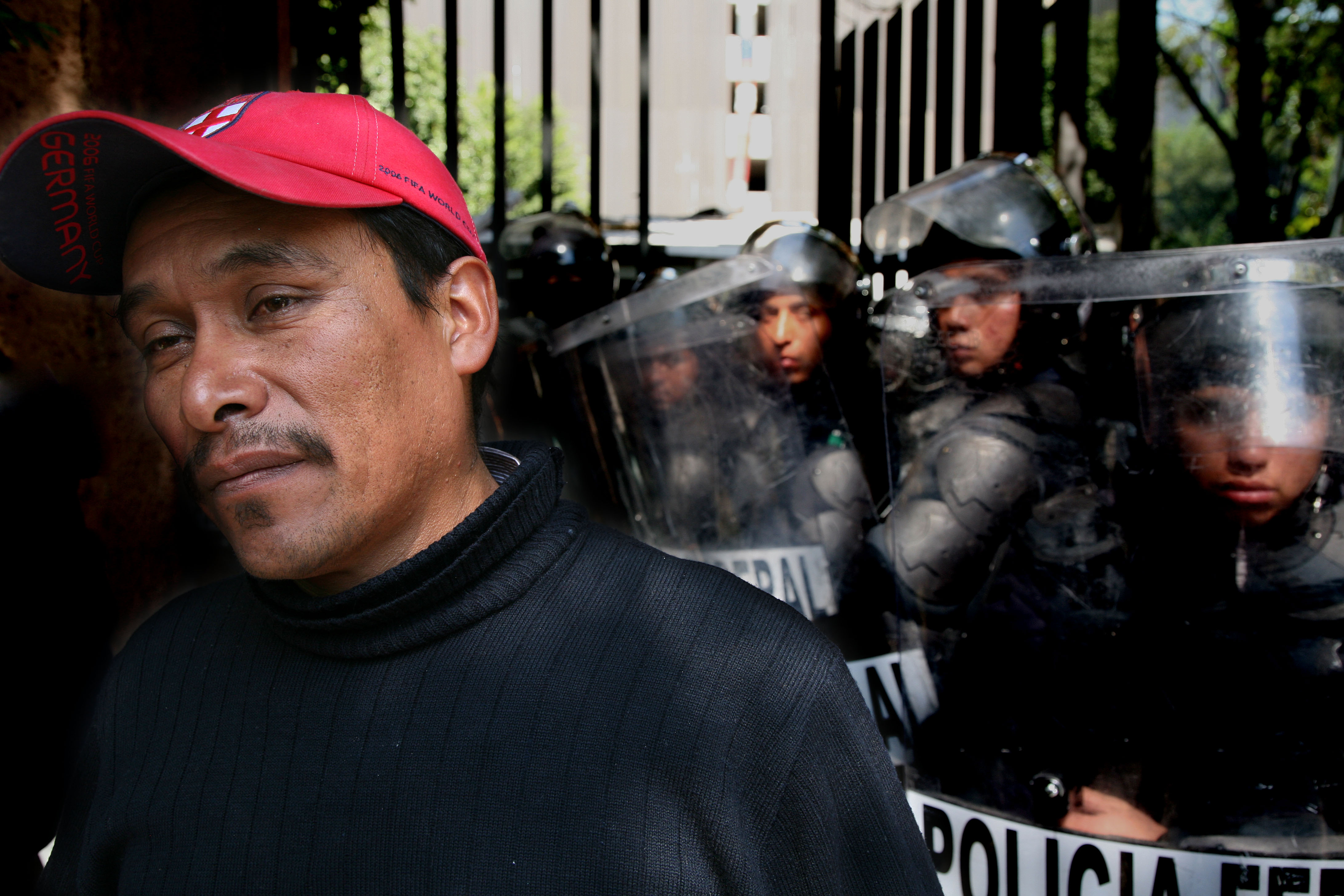 Mexico City police face a teacher from Michoacan. Teachers arrived in the capital from all over the country to demonstrate against the government’s education reforms. © 2015 by David Bacon.

During September 1–5, 2014, I attended and presented at a forum of the Mexican Chapter of the Permanent People’s Tribunal (PPT) in Mexico City that documented the impact of the past 20 years of the North American Free Trade Agreement (NAFTA) on Mexico, Canada, and the United States. Many Mexican economists and researchers at the Tribunal provided testimony to document the increase in poverty (now affecting 50 to 60 percent of the population), decrease in real wages (40 percent loss since the mid-1990s), increasing dependence upon multinational banks and corporations, and increased human rights violations since NAFTA’s implementation.

I was invited to participate by one of the organizers, Dr. Alejandro Álvarez Bejar, a longtime friend, political activist, Social Justice advisory board member, and part of the faculty at National Autonomous University of Mexico’s (UNAM) School of Economy. My presentation was about the work that Sacramento State University colleague Nadeen Ruiz and I have been doing in Oaxaca and California in recent years regarding transnational teacher education. But mostly I listened and took notes from the rich oral and visual presentations from some 30 other presenters.

The purpose of the forum and the sister conference is to prepare a case that will be presented before the PPT in Rome (see the PPT’s website).  The PPT’s verdicts are not binding, but they can serve as recommendations to the International Criminal Court. According to the lead organizer for the PPT in Mexico, Andrés Barreda, this process is seen by leaders of the faith, labor, and human rights communities as one way that grassroots voices can challenge NAFTA and the consensus among opinion makers that free trade is good for the Americas. What follows are some highlights from the testimonies and research on how NAFTA and similar neoliberal policies are responsible for institutionalized poverty and violence in Mexico.

John Saxe Fernández, a senior economist and political scientist from the UNAM’s Institute of Economic Studies, focused on the privatization of education, the destruction of unions, and the very recent reforms by the Peña Nieto government that have denationalized the oil industry and handed sectors of it over to Shell, Chevron, and other private oil conglomerates. Saxe Fernández called our attention to the way in which NAFTA ties Mexico not only to the US economy but, worse still, also to its military and national security priorities worldwide.

Jeff Faux, a researcher from the Economic Policy Institute in Washington, DC, and one of several North Americans at the PPT, explained that NAFTA is clearly aimed at increasing the power, profits, and hegemony of ruling circles in all three countries involved (the United States, Canada, and Mexico), with the United States in the driver’s seat:  “It was never about increasing general prosperity,” he said, “but to increase profits by increasing inequality and to keep the Left from taking power in Mexico.” International agreements are more powerful and more difficult to change than domestic ones are, and it will be difficult for any future progressive government to renegotiate the terms of NAFTA. For that reason, broad alliances of popular movements and groups of all kinds—labor, academic, health, scientific, environmental, etc.—may be the only option available to seek a different future.

Journalist and photographer David Bacon (see his image in this blog, and his personal website) gave an excellent summary of current US immigration policies, which are rooted in the exploitation of Mexican labor. Additional testimony is now being gathered by the Tribunal among Mexican and Central American immigrants in the United States. (A reference to one of Bacon’s many excellent online articles is provided in the footnotes below.)

Tony Clark, a longtime activist from the University of Toronto, was one of several Canadians who documented the dramatic changes for the worse in Canada since NAFTA was signed:  “Historically,” he said, “Canada has been a resource supplier to the industrial powers (England, France, and now the United States), providing raw materials like fish, wheat, water, lumber, and now oil and minerals.  NAFTA promised us Canadians more industrialization so we could grow and become more independent, but this was a big lie. Now we are even more stuck in the model of extractivism. Article 315 [of NAFTA’s Chapter 3 regarding “National Treatment and Market Access for Goods”], for example, requires Canada to export its raw materials. So Canada is a petro-economy and a petro-state, at the expense of the industrial and service sectors. It has become a resource and energy colony. Much of this is also true of the United States—especially with fracking and agro-exports.”  Clark praised the PPT as an example of grassroots organizing and consciousness-raising that needs to expand its reach in Mexico, Canada, and the United States.

Mexican author (Revista Regeneración), filmmaker, and activist Jesús Ramírez Cuevas offered a particularly dramatic presentation and provided many examples of how “NAFTA equals violence, loss of liberty, and violation of human rights. Narco-violence disrupts and disorganizes civil society in Mexico, creating conditions for greater control and stealing of land and natural resources. So far there have been 100,000 deaths and 25,000 disappeared—plus the poverty of a whole generation of children and youth. This is ‘free trade,’ here are the cadavers. The puppet masters and arms are US, but the dead are Mexican.”

The  September 26, 2014, disappearance and likely killings of 43 student protesters from a teachers college in Ayotzinapa, Guerrero, will undoubtedly form part of the case being brought by the People’s Permanent Tribunal. As Ramírez Cuevas reminded us, such internationally backed violence—carried out by a range of perpetrators, including US government-financed and -trained Mexican police and military, private security forces of transnational companies, DEA agents, and international drug cartels—is so strong because people in communities and cities throughout Mexico are resisting the imposition of NAFTA-related neoliberalism. In total, there are 350 current conflicts involving communities that are fighting back against outsiders trying to exploit their land and resources. Stay tuned to the PPT-Mexico’s website (www.tppmexico.org ) and note the following resources.

* Peter J. Baird, Emeritus Professor in the College of Education at Sacramento State University, is a long-term observer of Mexican politics and culture. He is coauthor of Beyond the Border: Mexico and the U.S. Today and director of an annual study abroad program in Oaxaca, Mexico.