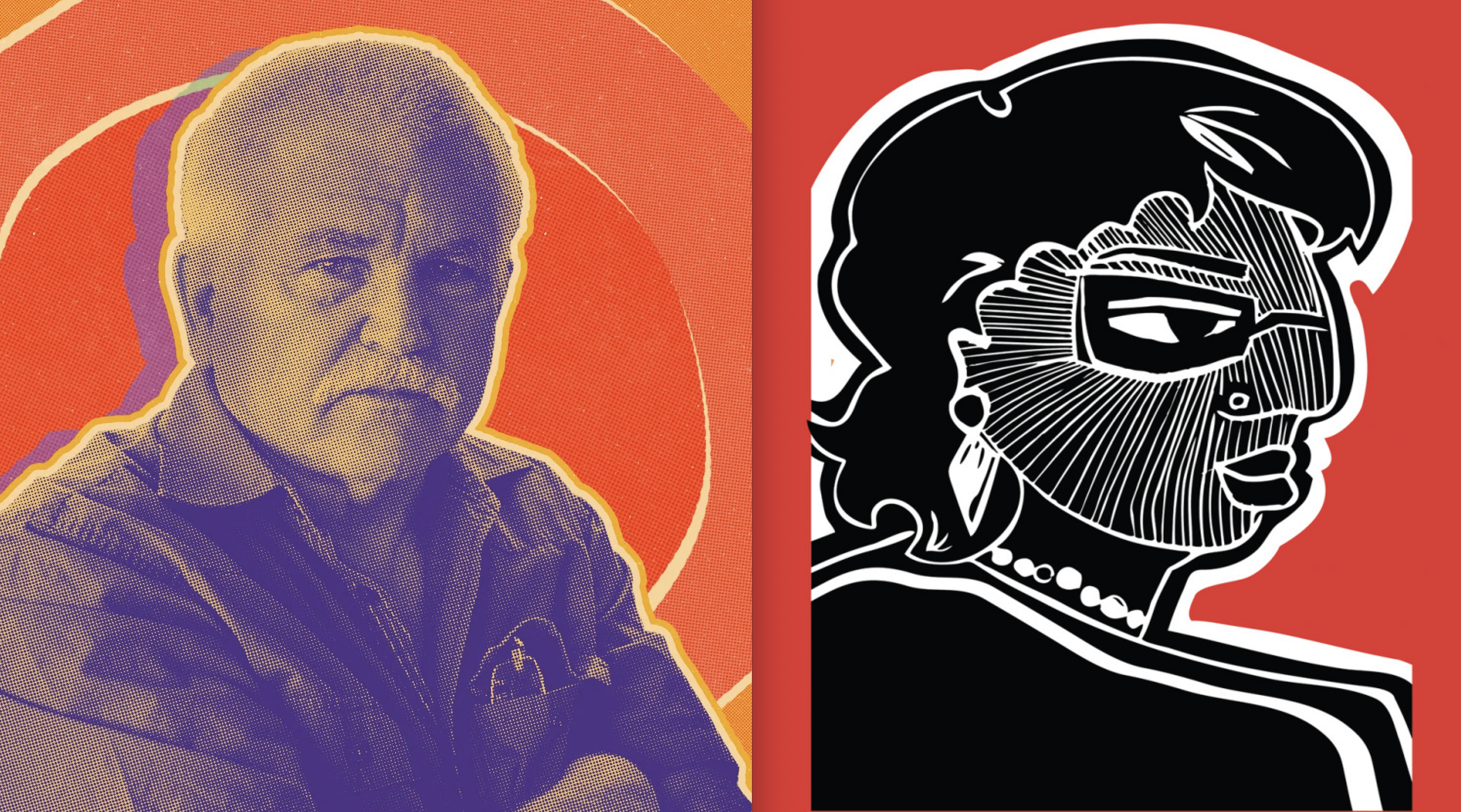 In loving memory of two dear friends of the journal—Mike Davis, who joined our Advisory Board back in 1989, and Elizabeth Betita Martinez, who has inspired all of us throughout her life—we share a memory of Betita written by Mike for our special issue dedicated to the Chicana activist.

I first met Betita—then known to me as Elizabeth Sutherland—in 1964 when she was working with Friends of Student Nonviolent Coordinating Committee (SNCC) in New York City. She played a brief but seminal role in my political education and was one of the chief organizers of a pioneering anti-apartheid demonstration that might also be characterized in retrospect as the first “Occupy Wall Street.”

Todd Gitlin, a member of Students for a Democratic Society (SDS), and his friend Chris Hobson developed the strategy of the Chase Manhattan demonstration. Inspired by the pioneering “power structure” research of SNCC (notably Jack Minnis’s 1964 document, “The Care and Feeding of Power Structures”) that had exposed the deep involvement of northern banks and corporations in the Mississippi economy, Gitlin and Hobson had discovered the central role played by David Rockefeller’s Chase Manhattan as a “partner in apartheid” during the economic crisis following the massacre of demonstrators by South African police at Sharpeville in 1960.

Rockefeller organized a consortium of banks to rescue Pretoria’s credit standing and preclude any international boycott. Chase Manhattan, moreover, continued a bloody and lucrative business with the Oppenheimers (Anglo-American Ltd.) and the other “kings of the Rand.” (The recent massacre of almost 50 striking platinum miners at Marikana is an eerie reprise of Sharpeville, 52 years on.)

Todd proposed the action to the December 1964 SDS National Council meeting in New York with the explicit hope of collaborating with SNCC. Despite the fact that I was the greenest and dumbest person in the New York national office of SDS (I had just been expelled from Reed College in Oregon), I was assigned to coordinate the action. Although I had been active in San Diego in the Congress on Racial Equality (CORE) during high school, I was a total virgin vis-à-vis left organizations and their Cold War politics.

From the very beginning, we had terrific support from the progressive American Committee on Africa—especially George Hauser, Kim Bush, and Judy Bennion—as well as from individual members of the African National Congress (ANC), some of whom were in New York performing as actors and musicians at the World’s Fair in Flushing Meadows. Also very supportive was a brilliant young diplomat from the Tanzanian mission to the United Nations, who was very close to Malcolm X’s recently formed Organization of Afro-American Unity. The OAU, of course, was trying to internationalize the freedom movement in the United States.

My Tanzanian friend wanted to arrange a discussion between SDS and Malcolm X, and we had a preliminary meeting with Malcolm’s friend, the extraordinary Black nationalist pioneer Lewis Michaux at his famed African National Memorial Bookstore in Harlem. But within a few days America’s “black shining prince” had been murdered.

It was one of the coldest winters in New York in a generation, and since the SDS staff was paid only $25 a week, all of which was expended on rent in a shared coldwater studio apartment in the Bowery, I seldom took the subway and spent most of my time on Arctic sidewalks walking up and down Manhattan. I was frozen and clueless.

At this point, in late January or early February 1965, my fairy godmother, Elizabeth Sutherland, rescued me and the Chase Manhattan project. She was simply dazzling, as were the tough, sophisticated kids in Friends of SNCC who were readying their “new nonviolence” to put under siege the federal courthouse in Foley Square and the Johnson administration in Washington, DC.

Another flashback: whatever his subsequent sins as mayor of DC, Marion Berry will always be my hero for supreme coolness under fire. After SNCC had jammed the revolving cold weather doors at Foley Square, enraged federal marshals had taken Berry inside and given him the third degree with telephone books and the like. I was standing at a side door with Clark Kissinger—then national secretary of SDS—and a New York Times reporter when Berry was hurled out on the icy sidewalk by marshals. He slid half a block—we assumed seriously injured—and then slowly stood up and with a calm smile said softly, “Hi, I’m Marion Berry, field secretary for the Student Nonviolent Coordinating Committee, and I want to complain about the Johnson administration’s refusal to defend the lives of freedom fighters in Alabama.”

Elizabeth and I went to One Chase Manhattan Plaza to scope out the enemy terrain. In a previous reconnaissance, my scruffy appearance—war-surplus duffle coat and frozen canvas high tops à la Southern California—had immediately attracted half a dozen security guards. But Elizabeth, dressed to the nines, probably could have walked straight into the boardroom on the sixtieth floor.

On another occasion, we went to the Urban League with Kim Bush to solicit support for the demonstration and they did everything but spit on us. The NAACP was more polite but equally unsupportive. Then Elizabeth organized a meeting for the Chase Manhattan coalition with John Lewis, who came up from Alabama with stitches still in his head.

But the Alabama Highway Patrol and George Wallace were not the only enemies of SNCC. Behind the scenes in New York, powerful right-wing social democrats (“Shachtmanites” was still a term I was learning to pronounce) coalesced around David Dubinsky and the International Lady Garment Workers Union (ILGWU) were determined to punish SNCC and destroy its northern fundraising base. They apparently were incensed by the Mississippi Freedom Democratic Party’s defiance at the Democratic convention the previous year, as well as SNCC’s “new militancy,” as it was called.

About the same time that Elizabeth briefed us on this conspiracy to defund SNCC, I had spent a day in Croton-on-the-Hudson talking with Victor Perlo, an old Communist Party economist who was an expert on big banks. Through him I discovered that the ILGWU’s pension fund was the largest pool of capital managed by Chase Manhattan. Here was a magical key to force disinvestment in South Africa.

SDS, after all, was still officially the student department of the League for Industrial Democracy; and the LID was a front group of the old Socialist Party (SP), an antique store exclusively owned and controlled by Dubinsky and the Garment Workers. Surely one word from Dubinksy to Rockefeller would suffice.

I lost my political virginity during a short meeting with Norman Thomas in his spare, frigid office at the LID/SP headquarters. He was one of the few figures on the American left who was actually a familiar icon: my mother, a registered Republican (but Irish rebel), had voted for him in 1932 when my father’s boss had ordered all of his employees to vote for Hoover. While recovering from a rather catastrophic hot-rod crash in my senior year in high school, my father had bought me Ray Ginger’s The Bending Cross, a biography of Eugene Debs, and I assumed that Thomas was of the same fiber as Debs.

He wasn’t. Very tall, ancient, and as gaunt as Klaus Kinski, he sat unsmiling in front of a steel desk, improbably eating a watermelon and spitting the seeds with deadly accuracy into a wastepaper basket a few feet away. Ping. Ping. Ping. It was unnerving.

Without directly looking at me, he growled: “The ILGWU is the bulwark against Stalinism and the most progressive union in American history. You little fucks are not going to embarrass us. Do you understand?” He then threw me out of his office.

A few days later I was called in to meet with Bayard Rustin, the genius behind the 1963 March on Washington. In contrast to Mr. Socialism, Rustin was completely charming and obviously the smartest person on earth. Betita had warned me that he was an irresistible seducer and so he was.

“Are you aware,” he said with a rather diabolical grin, “that you’re sitting in the same chair that Bobby Kennedy sat in when I told him that the March was happening whether or not he and his brother approved?” I squirmed, as had Kennedy, because the chair—a famous joke in civil rights circles—had a notoriously loose spring that goosed every visitor.

Rustin praised conscientious white kids in SDS and our interest in fighting apartheid, told a story about Mandela, mentioned A. Philip Randolph, promised to lend support to our demonstration, and warmly shook my hand. I was half way down the block before I realized that he had also given me the same warning as Thomas, if not so brazenly: “Don’t fuck with Dubinsky.” SDS could also be defunded.

Indeed SDS was pulled off the social democratic teat later in the spring, when we refused to exclude members of the Communist Party and Socialist Workers Party from participating in our anti-apartheid and antiwar campaigns. Meanwhile, however, we had the singular satisfaction of knowing that David Rockefeller was deeply embarrassed by “Chase Manhattan: Partner in Apartheid.” We had our own inadvertent spy network. Three SDS members in the Boston area were children of bank board members, while Abby Rockefeller, David’s renegade daughter, was a clandestine sympathizer of the New Left, as well as an early feminist.

Elizabeth kidded me mercilessly about SDS’s ruling class family ties, but also reassured me that this was why we were unlikely to suffer the kind of police violence that SNCC encountered daily in Mississippi and Alabama. I’d become a little unnerved after a recent visit to the NYPD’s Wall Street precinct to inform them of our plan for nonviolent civil disobedience at One Chase Manhattan Plaza. The fat, ruddy Irish cops, with a drunken priest hovering incongruously in the background, sweetly told me that they hadn’t put a dent in their nightsticks in years and therefore would relish meeting us. A captain suggested that I’d be wise to buy one of the sacred medallions that the priest was selling.

A few days before the Chase Manhattan sit-in on March 19th, 1965, I paid for the cold New York winter and Spartan living conditions with strep throat and a 106-degree temperature. (Elizabeth once warned me that the entire SDS National Office would probably die of scurvy.) But I shivered in the Bowery with the satisfaction of knowing that David Rockefeller was also shivering sixty stories above Wall Street.

The demonstration, despite police threats and a bank injunction, was an exhilarating success. Todd Gitlin, Elizabeth, and Kim Bush spurred on the seven hundred demonstrators, Friends of SNCC high school and college kids in the vanguard, launching what in retrospect was the first “Occupy Wall Street.” (SDS chapters carried out solidarity demonstrations in several other cities.)

A few weeks later, SDS, SNCC, the American Committee on Africa, and other Chase Manhattan activists went to Washington, DC for a conference that was supposed to launch an ongoing anti-apartheid movement. I forget the details—mostly because of bitterness—but the National Student Association totally sabotaged and derailed the coalition. Two years later (as reported in a Ramparts magazine exposé in March 1967) we all found out that in 1965 Phil Sherburne, the NSA president who had been a principal figure at the conference, was working for the CIA and Johnson administration.

As years went by, I wondered what happened to our mentor and muse Elizabeth Sutherland. In the late 1980s, after a Bay Area launch of my first book, Prisoners of the American Dream, Susanne Jonas invited me to have dinner with the legendary Betita Martínez.

Betita and I stared at each other for almost half a minute. “You’re that little SDS boy!” she exclaimed with some shock. “Elizabeth,” I chuckled. “I’ve missed you.”