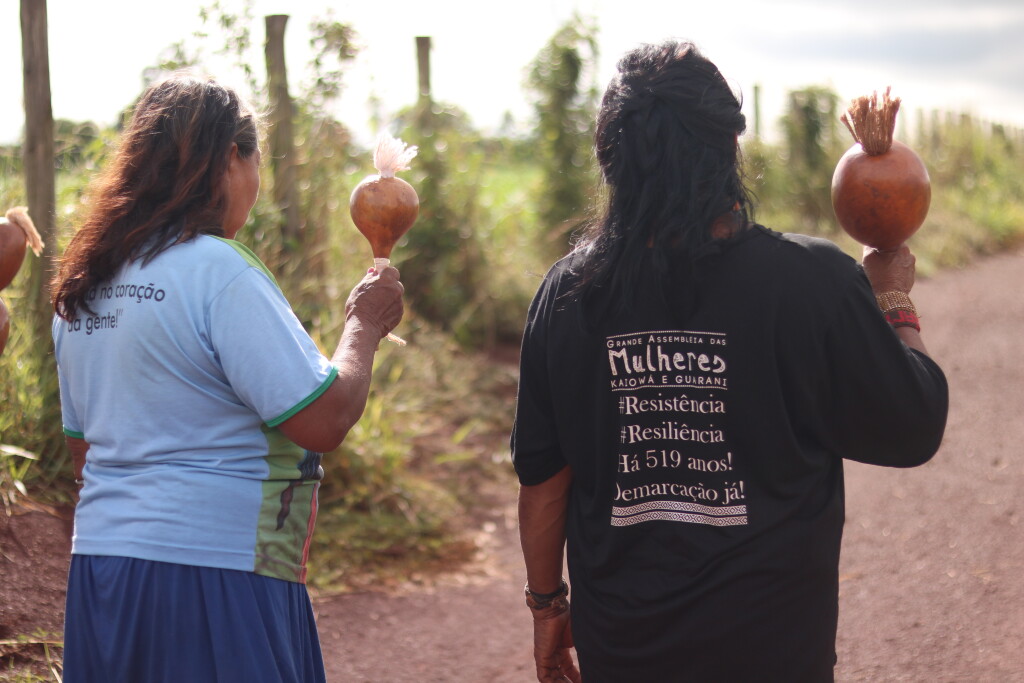 In November 2020 the Guarani and Kaiowá Women’s Council, Kuñangue Aty Guasu, shared the first comprehensive report documenting the initial outcomes of their Violence Mapping project, ‘Corpos Silenciados, Vozes Presentes’. Located in Mato Grosso do Sul, Brazil, since 2006 the Kuñangue Aty Guasu has been working with their local communities to collect reports on the specific ways violence affects the lives of Indigenous Guarani and Kaiowá women.

Historic and systemic violations against the Guarani and Kaiowá communities have led them to live in a context of extreme precarity, often described as the most severe humanitarian crisis faced by Indigenous people in Brazil. Decades of aggressive appropriation of their traditional territories (tekohá) for agricultural expansion, and the ongoing delays in delivering the official demarcation of Guarani lands by the federal government, have forced these communities into small, overcrowded, poverty-ridden reserves. Recent reports showed that these areas are affected by the highest incidence of gender-based and sexual violence among any Indigenous communities in Brazil.

“Violence is a hotly debated topic during our annual assemblies”, the members of the Kunãngue Aty Guasu report. They note how this violence is often “silent” (violência silenciosa), normalised to the point that it goes unrecognised by the very women suffering from it. The ‘Violence Mapping’ project aims to support local women as they turn this silence into a narrative, to make violence visible so that it can finally be identified and addressed. To do so, the Guarani and Kaiowá women have now joined efforts with Dr Jerome Lewis at University College London (UCL) Anthropology, Fabiana Fernandes at the Institute for the Development of Art and Culture (IDAC), and the UCL Multimedia Anthropology Lab (MAL). This partnership, supported by the UCL Global Engagement Fund, aims to visualise the data gathered by Indigenous women and present it as an interactive map, documenting the incidence and geographical distribution of such violence.

What is Violence for Guarani and Kaiowá Women

As outlined in the Kunãngue Aty Guasu’s reports, the violence affecting Indigenous women is a broad and complex phenomenon, rooted in the historical marginalisation that they continue to face on a daily basis and operating at the intersection of their ethnicity, gender, and chronic economic precarity. They point out how the only law aimed at protecting female victims of violence – Law 11.340, better known as the Maria da Penha Law – does not grasp the complexity of the Guarani and Kaiowá context, and therefore fails to fully protect Indigenous women. As many of the forms of violence they experience are not accounted for in the non-Indigenous (karai) legal system, their suffering continuously slips through the cracks of the judiciary system.

In ‘Corpos Silenciados, Vozes Presentes’, violence against women is identified as both physical and psychological, and perpetuated by various people and institutions – including husbands, boyfriends, the police, public institutions, health professionals, and universities. Among its manifestations, the Women’s Council highlights the stigmatisation of sexual violence among Indigenous communities and the consequent silencing of rape survivors; the demonisation of Indigenous culture, ranging from racist, malicious looks to accusations of witchcraft, death threats, torture, and murder of their elders; the widespread obstetric violence characterised by lack of appropriate care and information, and intrusive, humiliating interventions which disrespect Indigenous cultural sensitivities and needs; and the confinement and confiscation of their lands for profit.

The latter point is particularly important as the Guarani and Kaiowá’s relationship with their ancestral land is fundamental to their physical, spiritual, and cultural existence. The Brazilian State, unwilling to demarcate Indigenous territories and recognise Indigenous land rights, is identified as the main perpetrator of violence. Groups of Guarani and Kaiowá have been responding with the ‘retomadas’ – the reappropriation of lands that have already been identified as part of their territory, but are still in possession of farmers. These attempts have been met with ruthless violence and evictions. The Guarani and Kaiowá women have long been at the forefront of this fight, exposing themselves to unique challenges and risks.

Strengthening the capacity of community-led responses to gender-based violence is essential to make visible the scale and spread of such violence, consequently facilitating strategies for delivering social justice. This commitment is what built the foundations of a voluntary collaboration between the Guarani and Kaiowá women, IDAC, and UCL MAL in October 2020, when they worked together to strengthen the digital communication infrastructure available to Guarani & Kaiowá women and to support the online coordination of their annual assembly.

Building from the success of this first collaboration, this partnership is now working to support the Kunãngue Aty Guasu’s long-term efforts to combat gender inequalities, by assisting in the creation of a digital infrastructure to monitor and make visible the violence against women. More specifically, the project aims to develop an interactive map to visualise and monitor the incidence and geographic distribution of gender-based violence against Guarani and Kaiowá women. Community members will be supported with comprehensive training on the use of the digital platform and the process of data input, designed specifically to increase accessibility for communities with low written and digital literacy.

The data visualisation and analysis made possible by the interactive map will provide an invaluable resource for the Guarani and Kaiowá women’s monitoring efforts, allowing them to identify, collect, and widely disseminate new datasets by their own terms. In a context where cultural and infrastructural challenges have historically excluded these communities from participating in scientific research and from accessing justice, this project aims to support Guarani and Kaiowá women’s’ capacity to represent their interests, so to develop accurate, sensitive, and effective mitigation measures to combat gender inequalities and violence.

During the project’s introductory meeting, held on the 6th of May, the members of the Kuñangue Aty Guasu described how researching and collecting data on violence against women has exposed them to further harassment and violence, both physical and psychological. It is also important to remember, they remarked, that the process of writing and talking about their suffering in Portuguese is in itself a form of violence. As they wrote in ‘Corpos Silenciados, Vozes Presentes’:

“The Guarani and Kaiowá dialect is our first language. Portuguese is the second language in which we were forced to understand the violent process of decimation and colonisation of our bodies. Writing in the Karai language (Portuguese) is also violence, but it is the fighting tool […] necessary to send out our cry for help.” (Kuñangue Aty Guasu, Corpos Silenciados, November 2020)

These issues highlight the need for a deeply collaborative research approach which amplifies Indigenous women’s own views, strategies, and needs in the fight against gender-based violence. By reinforcing the Guarani and Kaiowá women’s capacity to collect and analyse data locally, collectively, and autonomously, the partnership aims to counteract this history of colonial oppression and to create a global network of support.

While this initial activity aims to directly address gender inequality and violence among the Guarani and Kaiowá women, the platform and training provided will contribute towards strengthening the community capacity to respond to other pressing challenges. Amplifying the voices of resilient Indigenous women, this partnership aims to contribute towards tackling institutional inequality and discrimination, and to address daily issues of hunger, poor water sanitation, and lack of healthcare resources that Indigenous communities in Brazil continue to face. In the words of Jaqueline Aranduhá, accomplished anthropologist and Indigenous leader: “Indigenous women struggle for their survival every day. Still, we are here at this meeting today because this is for the long-term, because it matters.”

The partnership will present the interactive map at a public event in September. Check out the UCL MAL website to join the online conference and learn more about the development of the project!