How the Camp Fire Was a Social Disaster 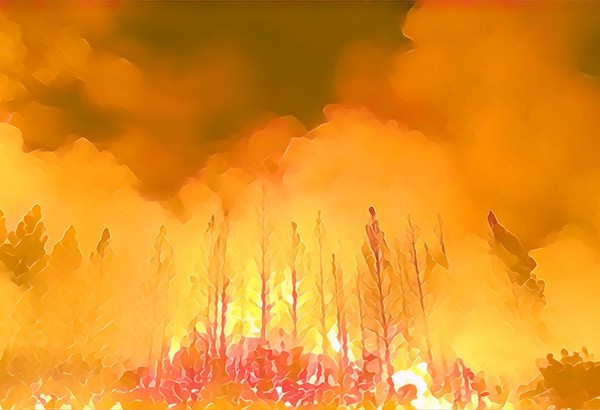 The Camp Fire, which crushed the lives and livelihoods of the 30,000 residents of the town of Paradise, California, was not just a natural disaster. It was a social tragedy rooted in inequality and injustice.

The Camp Fire is but another example in a long string of disasters that supposedly is inflicted upon us by the “nature” of things. That is how the media interpreted the 2007–2008 financial crisis: as “the cost of doing business,” with the vast majority of bailout dollars going to corporations and/or to the very culprits of the crash. It is also how the media continuously construct the “criminal” system: as a social effort “saving” us from “criminals” and the “epidemic” of “crime” (instead of what it really is, i.e., evidence of a targeting practice from a culture awash in white supremacy and class warfare, a massive denial of the ubiquity of “crime,” and one of the planet’s most iniquitous, unlawful, and disturbing collection of institutions and practices).

The commercial media generally portrayed the burning of Paradise as a disaster brought on by uncontrollable Nature, or at best, as the consequences of global warming wrought on us all.1 If one does not look closely, what took place in Paradise gets lost in a rhetoric that literally reshapes what happened. Repeatedly classified in media outlets as the deadliest wildfire in recorded California history, or as a new kind of climate-change wildfire, the Camp Fire has become the foundation of a narrative that deeply buries the truth.

Emergencies tell us a great deal about how life is valued. We learned a lot about how the federal government values communities of color, the poor, and our captives (prisoners) in the stories of Katrina and Maria. Paradise, a town of mostly small, humble houses and numerous mobile homes and trailer parks, was a place whose residents belonged squarely in the middle- and lower-income brackets. For the nearby university town of Chico, Paradise served as a reservoir of blue-collar workers and laborers. For retirees, it was an inexpensive place to make a home, an escape from the absurd price of California real estate.

The popular narrative of the fire focused on “the normal fire-scape of California,” “the results of people living in a fire-prone area,” or what the Governor called “the new abnormal of fires.” But where was the barren ring-of-land protection for Paradise? Where was the prescribed burn around the town of Paradise—which was what saved the neighboring city of Chico from this same fire? One cannot help but remember the well-known inadequate protection of the New Orleans’ levee system that in Katrina left many neighborhoods of color and poor neighborhoods below water. How could a town like Paradise, known to be extremely vulnerable to fire, and especially vulnerable to a fire that would move with extreme speed as the Camp Fire did, be left without protection? Why did only a fraction of the residents receive alerts or an order to evacuate? Why was the decision reached not to use an Amber Alert communication, a message that would have gone to every cell phone in the area? As one resident said, “They totally dropped the ball on this. Look, all these people dead, all these people missing. It’s like they decided to forget about us. Like we weren’t worth saving” (Romero et. al 2018).

As one local wrote, “What emerges, too, is a troubling sign of working- and middle-class challenges compounded by disaster: people on Social Security or disability, people with no insurance, people with nowhere else to go. In this increasingly expensive swath of California, Paradise was one of the last places where you could live on a fixed income. Hospitals, rehab centers, convalescent homes and community pharmacies dotted its main roads. Less than two months ago, the local county declared a shelter crisis” (Pape 2018).

As local fire attorney Matthew Luzaich told me, “Another problem is that insurance companies denied fire coverage to many people. In my experience speaking with clients it was almost always the case that those denied fire coverage were those in mobile homes, modular houses, and very inexpensive homes. Was it the location of these places that made them less desirable to insure? I’m told that it wasn’t a cost issue for these people, it was a matter of not being a possibility for them at any cost.”

The questions linger. Almost half of the dead from the fire are 65 or older. What does this say about how we value the elderly? How could a state main power provider, PG&E, which has already been blamed in a California Department of Forestry and Fire Protection report for being the cause of a number of previous fires, be allowed to operate dangerous electric power transmission lines that are currently the favored cause of the Camp Fire? Why are these wires, well known as an extreme fire danger when near forests, not mandated to be buried in the ground? What does this indicate about how a society decides when the interests of a corporation and its most vulnerable populations collide? What does this say about the lack of protections in place from the unhinged corporate greed and unimaginable disregard for human life and the environment from corporations such as PG&E—one that has been documented as an extreme abuser and the subject of a Julia Roberts’ Hollywood blockbuster, Erin Brockovich? When a town narrows the limited paths for emergency exits for the sake of commerce, despite warnings to widen them in a Butte County grand jury report after a 2008 fire, what does this say about the battle of humans vs. dollars?

The aftermath of the fire has exacerbated the problems of the former residents of Paradise. The first wave of evacuees took refuge in a large field adjacent to and owned by a Chico Walmart store. I was shocked by how much hostility was directed at fire refugees and how they were portrayed as potentially dangerous. In an effort to supposedly protect consumers from witnessing the unpleasantness of people in the midst of total loss, pain, and despair, Walmart hired a Texas private security firm, staffed by massive musclemen clad in intimidating military-style outfits and carrying weapons. Unbelievably, Walmart quickly erected a fence around the field and removed the refugee campers. Many of these campers, having lost vehicles and homes, had only local jobs available and needed to stay nearby to get to them; or they wanted to stay close to nearby families and did not want to move to the more distant Red Cross facilities at State Fairground spaces in neighboring counties. In addition, by displacing people in need to distant housing shelters, local activists, who were visiting, comforting, bringing supplies, and feeding people in the Walmart field and other locations, were shut out.

The Camp Fire is already becoming old news. Media accounts prefer new disasters, not reflections on events already maxed out on “empathy exhaustion.” A friend and I started a foundation that connected Bay Area food and beverage companies with local shelters needing food; initially much was given, but for weeks now we cannot even get a response from these providers. Starting very recently, residents have been allowed to return to the almost entirely burned-to-the-ground town of Paradise. A friend working in Chico as a nurse is deeply concerned about the health risks from simply staying and breathing in a town that needs years to clean up the profound toxicity of the earth, the frequently poisonous remains of homes and businesses, and even the harmful air.

1. Although Paradise suffered the largest loss of lives and homes, the Camp Fire also caused great losses in the communities of Magalia, Concow, Yankee Hill, and Centerville.

Gee, Alastair and Dani Anguiano. 2018. “Last day in Paradise: The Untold Story of How a Fire Swallowed a Town.” The Guardian, December 20.
Pape, Sarah. 2018. “When Paradise is on Fire.” The New York Times, November 13.
Romero, Simon, Tim Arango, and Thomas Fuller. 2018. “A Frantic Call, a Neighbor’s Knock, but Few Official Alerts as Wildfire Closed In.” The New York Times, November 21.

* Michael J. Coyle, Ph.D., is Professor in the Department of Political Science and Criminal Justice at California State University, Chico, and works to highlight the social construction of discarded persons—the excluded, the homeless, those targeted as deviant, the imprisoned—as “unlike us,” “dangerous,” or “punishment-worthy.” He is the author of Talking Criminal Justice: Language and the Just Society and co-editor of the forthcoming International Handbook of Penal Abolitionism.