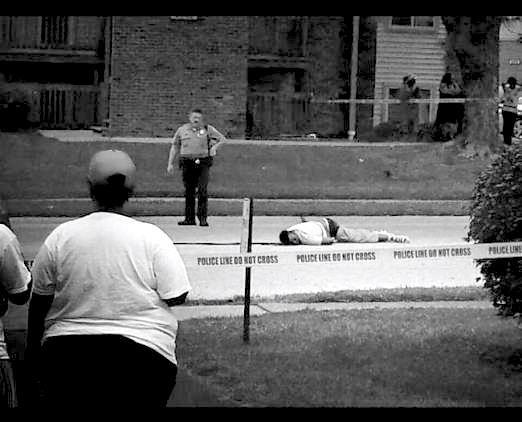 Michael Brown is to be buried today (August 25, 2014) in St. Louis, near his hometown of Ferguson, Missouri. As the world knows by now, two weeks ago the eighteen-year-old recent high-school graduate was shot six times and killed by Ferguson Police Officer Darren Wilson. Michael Brown was unarmed, and the reasons for Officer Wilson’s actions have yet to be publicly explained. In a recent post, Professor Alessandro De Giorgi of San Jose State University (and editorial board member of Social Justice) puts those still unclear facts into the very clear context of what he aptly describes as the “complex penal machinery that has gradually colonized the US public space—from schools to university campuses, from urban centers to gated communities, from shopping malls to public transportation systems.” As De Giorgi argues, deaths like Michael Brown’s are routine in the age of mass incarceration. The protests in Ferguson this month have helped a great deal to broaden public knowledge and media recognition of how that “penal machinery” looks and feels to minority citizens in America. But as De Giorgi would insist, the future will look a lot like the present unless the larger structure upholding a war on segregated minority neighborhoods is brought to an end.

Short of outright defeat by the enemy (always unlikely in asymmetrical conflicts), wars end when the moral legitimacy that underwrites the mass complicity required in any modern bureaucratic society collapses. Images of human suffering and human fragility play a big a role in creating such moments of delegitimation. For my generation, the news photograph of a young Vietnamese girl running naked down a road to escape burning napalm behind her seared our consciences and will remain with us until our death. The photograph taken by AP photographer Nick Ut outside Trang Bang, Vietnam, in June 1972 (read about the photograph of the “napalm girl” here) embodied the war’s illogic and cruelty for a growing majority unwilling to consent in its prosecution. Napalming little girls to prevent even something as feared as communism from emerging in South Vietnam came to seem intolerable to all kinds of Americans who were not in any way radical. Although we do not always name them as such, moments when the organized violence of war is delegitimized are moments when human dignity emerges and becomes a counterbalance to the trust in authorities and the bureaucratic layers that separate the organized violence of war from its alleged beneficiaries. It is in these moments that people start demanding change.

Perhaps the most searing images out of Ferguson are the many captured by cell phone cameras and videos that show the uncovered body of Michael Brown, already dead, lying with his terrible wounds exposed for more than four hours on a hot summer day. As Michael is being buried, it is fitting to recall how fundamental the treatment of death bodies is to the humanity of those bodies and the decency of the society controlling them. Funerals, which are routine even for those who place little faith in religion, are a great expense in money and emotions, and seem to serve no practical goal. Searching for utilitarian rationales, we can see their function as allowing psychological or emotional healing. And this is because of something more fundamental: the human dignity that inheres even in a body from which life has departed. This human dignity, which outlasts life, demands respect for the body. The failure of the Ferguson Police Department and their colleagues to accord Michael Brown’s body that respect communicated in the most explicit way their failure to see his humanity. Nor was this a context that allowed degrading behavior to be overlooked by the vast majority. Whatever happened moments earlier, Michael Brown was no cop-killer; he was a victim with six bullet wounds in him, some of them terrible. Like the horrific photographs of lynchings, the exposure of the abused and killed body is as shocking as the death itself. The failure of those police officers to cover Michael and his wounds was an affront to both his human dignity and to the fundamental decency of our society.

Mass incarceration and the penal machinery that operates in segregated neighborhoods all over America has long enjoyed a low visibility that has allowed its fundamental inhumanity and basic lack of decency to be ignored by key institutions necessary to American democracy—journalists, courts, and ultimately popular expression of non-consent. In my recent book, Mass Incarceration on Trial: A Remarkable Court Decision and the Future of American Prisons, I discuss the role that images of suffering and chaos in California prisons played in compelling the Supreme Court to uphold a radical order to reduce prison population. Like the images of Ferguson, those photographs of suffering prisoner bodies only do the work of delegitimation when viewers can acknowledge the humanity of those depicted. They work against the odds of enormous cultural prejudgment that authorizes violence against “dangerous” others, especially young male black and brown bodies or anyone convicted of a felony.

The control bureaucracies, which find themselves on the defensive at such moments, have powerful discursive resources to dehumanize those whose suffering might otherwise end our complicity. Violent crime, especially when it can be linked to minorities, has been a crucial locus of mobilizing popular consent to the wars on crime and drugs since the 1970s. Images of looting and claims of violence in New Orleans during the aftermath of Hurricane Katrina in September 2005 shut down a cycle of growing sympathy for people trapped in New Orleans and outrage at the Bush Administration’s clear indifference to their fate. That has not happened this time. Neither the images of looting and violence nor the video showing Michael Brown stealing cigars and shoving a store clerk has stalled the cycle of sympathy and outrage that continues to resonate from Ferguson.

Human dignity arose on the streets of Ferguson, hovering over Michael Brown’s body, growing ever larger as that body was degraded in the hot sun. Not his soul or his ghost, but the specter of the humanity he shared with all of us. May Michael Brown rest in peace. May Michael Brown’s proper funeral in St. Louis bring comfort to his family and friends. May the specter of human dignity walk the streets of Ferguson for a long time, forcing all of us to decide whether we wish to belong to a decent society.

Jonathan Simon (email: jsimon@law.berkeley.edu) is Adrian A. Kragen Professor of Law at the University of California, Berkeley. His scholarship concerns the role of criminal justice and punishment in modern societies, insurance and other contemporary practices of governing risk, the cultural lives of law, and the intellectual history of law and the social sciences.