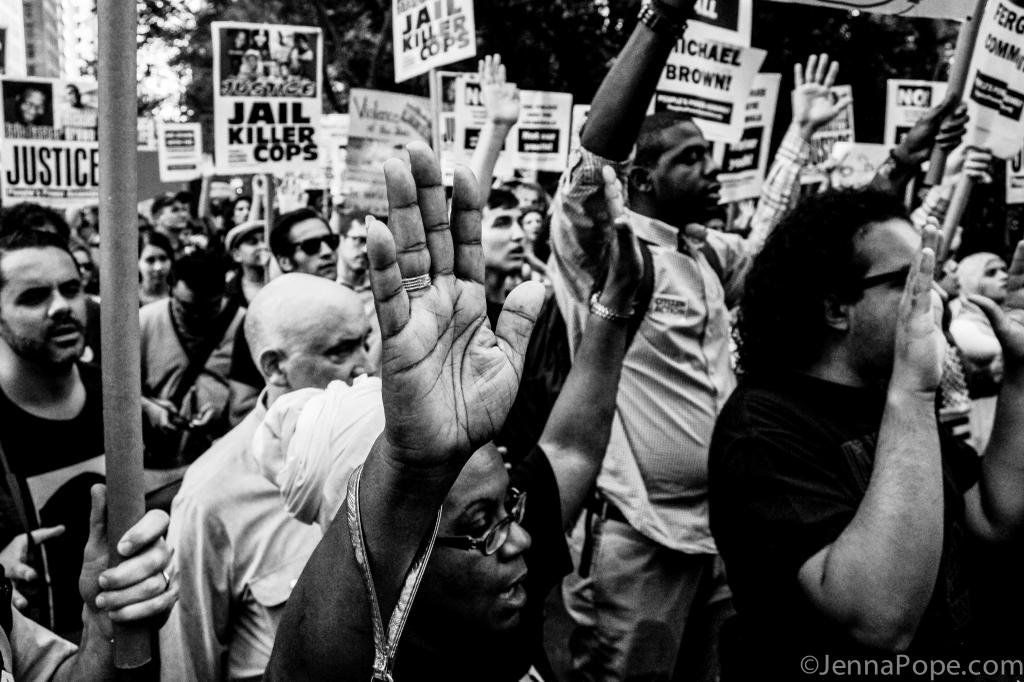 According to a recent FBI report on cases of “justifiable homicide” annually reported by a sample of police departments across the nation, between 2008 and 2012 law enforcement officers have “justifiably” killed an average of 400 civilians each year. An analysis of the racial composition of these “incidents” reveals that an average of two African Americans have lost their life each week at the hand of white police officers. The victims are mostly youngsters and adolescents: according to the report, 18 percent of black men killed during encounters with the police were less than 21 years old (versus 8.7 percent among white victims). Oscar Grant, who was executed by a white police officer who shot him in the back on New Year’s Day in 2009 after he had been handcuffed in a BART station in Oakland’s Fruitvale district, was 22 years old. Sean Bell, who was riddled with more than 50 bullets by NYPD officers on the night of November 25, 2006, after celebrating his bachelor party at a night club in New York, was 23.

Thus, the case of Michael Brown, an 18-year-old unarmed young African American who was shot and killed on August 9, 2014, in Ferguson, a segregated suburb at the northern edge of St. Louis, Missouri, is not exceptional or unusual. It isn’t, because most encounters with the police experienced by young blacks in the streets of American urban and suburban ghettos happen in the form—although fortunately not always with the same outcome—observed in Ferguson, Oakland, and New York. Those encounters are feared because the burden of proof is in fact on the suspect. It is not on the police, because the expectation of being verbally or physically abused is constant and because of the inclination of the police to arrest young African American (and Latino) men on any pretext. Moreover, the planting of evidence and other similar abuses is well documented. Despite three decades of rhetoric about community policing in academia, the media, and political debates, inside poor and segregated neighborhoods the police act (and are perceived) as an occupying force, as a high-tech army that intervenes sporadically and unpredictably to enforce—always with the threat, sometimes with the actual use of force—an arbitrary and unjust order.

However, an explanation of what happened in Ferguson (and occurs daily in hundreds of locales across the United States) must look beyond the (mal)functioning of law enforcement agencies. The police are simply the first cog in a much broader and more complex penal machinery that has gradually colonized the US public space—from schools to university campuses, from urban centers to gated communities, from shopping malls to public transportation systems. This trend has been gaining ground for more than 40 years, first through the rhetoric of the war on crime and drugs, and later through the war on terror. The police have been deeply affected by this state of permanent war, which started in the early 1970s and is largely still in place. From the war on crime of the 1980s, police departments have gained significant injections of officers and federal funding; from the war on drugs they obtained important financial benefits, given that a 1984 federal law allows state and local police agencies to retain up to 80 percent of the proceeds from drug-related asset forfeitures; finally, under the rationale of the wars on drugs and terrorism (and specifically after the partial withdrawal of US troops from Iraq and Afghanistan), police departments have received a variety of high-tech equipment—from night vision devices to the drones now increasingly deployed for the surveillance of urban areas, from armored vehicles to assault weapons. The result has been a process of militarization of law enforcement, with police departments now routinely (but selectively) deploying SWAT teams even to perform arrests, drug searches, and visits to “high-risk” parolees.

This dangerous trend becomes even more problematic in light of two circumstances, both particularly acute in the United States. The first is the vertical increase in police discretion, partly as a result of the growing popularity of the “New York model” of policing, and specifically of the stop-and-frisk tactics employed by the New York Police Department to racially profile young African Americans and Latinos under the mantle of criminological legitimacy. The second is the deeply segregated structure of the US urban landscape, which is reflected in the radical divergence in methods, behaviors, and perceptions of the police between middle-class neighborhoods and urban ghettos. The police are clearly one of the main enforcers of this racially and economically segregated order, the boundaries of which become immediately visible whenever the police intervene on either side of the boundary.

But the death of Michael Brown and of hundreds of other citizens, mostly African Americans and Latinos, who are “justifiably” killed every year on the streets, cannot be grasped just by focusing on the transformations of policing. The police are only one component (albeit essential) of the huge social control machinery that US political and economic elites have built. This apparatus is supported by sensationalist media and by a public opinion numbed by the cyclical moral panics about crime and drugs that have followed the civil rights revolution of the 1960s. It has been a largely successful attempt to enforce the existing structures of class and racial inequality through the punitive containment of the urban poor.

At eighteen years of age, Michael Brown had managed to get his diploma from Normandy High School in St. Louis—a 98 percent black school, where 27 percent of students in 2012 were suspended for ten days or more, and 22 percent dropped out by the end of the school year. Indeed, in ever closer collaboration with the police, the public schools have functioned as a second essential component—or perhaps one should speak of “transmission belt”—of the penal machinery that has killed Michael Brown and many others. As segregated as the poor neighborhoods they serve, urban public schools have often become a kind of pre-carceral reception center, people-sorting hubs whose main mission is to maintain a semblance of order through the early detection and punishment of “at risk” subjects—increasingly with the direct involvement of police agencies, as Kathleen Nolan has shown in her recent ethnographic work. The growing elective affinity between ghetto schools and prisons for ghetto residents emerges from their architectural and organizational resemblance: from school uniforms to the constant presence of police patrols at entry and exit times, to the ever-present metal detectors.

Then, there is prison proper, a gigantic warehouse for stocking and recycling the surplus humanity that struggles to survive as it can in areas of urban relegation like Ferguson, Missouri. The US carceral archipelago, whose size increased fivefold between 1970 and 2010, has become a statistically predictable fact of life for one-third of African American men aged 20 to 40—the same age group as Michael Brown, Oscar Grant, and Sean Bell. Inside this huge penal colony of two million people, over 60 percent of whom are people of color, prisoners experience further segregation, violence, and abuse; they accumulate further disadvantage in the labor market, due to the lack of any real educational opportunity in prison; they see their physical and psychological afflictions deteriorate, given that close to one-third of inmates suffer from mental illnesses, and another third is affected by chronic pathologies like hypertension, diabetes, or AIDS. But the hold of the prison on the urban ghetto does not end here: every day in the United States, close to 1,600 inmates leave the gates of the prison with a few dollars in their pocket (if they’re lucky) and a bus ticket. In most cases, they will be dumped back into the same segregated and dilapidated neighborhoods where they had lived and were arrested. Here their prospects are bleak: they can either fill the ranks of the working poor by scrambling to find low-wage work in a fast food or some other low-skill service job; they can end up in extreme poverty and homelessness, in the absence of any structure of welfare assistance; or they can venture once again into the illegal economy and thus increase their chances of returning to prison upon the next “encounter” with police or other social control agencies. In this context, rather than death from old-age or natural causes, their lot will more likely be premature death at the hand of an abusive police officer or as a consequence of street crime (given the relative indifference of the same police), the violence of other inmates or prison guards (for the many who experience prison life), or the worsening of untreated diseases (due to the lack of a real public health services for the poor).

In an important recent book, African American scholar-activist Ruth Gilmore defined racism as “state-sanctioned or extralegal production and exploitation of group-differentiated vulnerability to premature death.” In this respect, the US penal machinery—seen here as a broad complex of institutions, practices, and strategies, not necessarily of a strictly penal nature, in charge of the punitive regulation of marginal classes—is an essential catalyst for structural, colorblind racism. With his “premature death,” Michael Brown is a victim of this machine, not simply of a racist white police officer in Ferguson, Missouri. The demonstrations in Ferguson, as in other parts of the country, are having a significant effect: they have forced US public opinion to reflect for a moment on the state of policing in America. The timid Obama administration has ordered a federal investigation of the incident, and the Department of Justice has started its process. An independent autopsy has revealed that Michael Brown was shot six times, two times in the head, and that he was not involved in a fight before that. It was indeed an execution. After the investigation, federal authorities will probably impose some degree of racial integration on the hyper-segregated Ferguson police department, which is 94 percent white in a city that is 67 percent black. However, the semantic slippage of these days, which has gradually shifted the focus of the debate from the racial violence of the police to its excesses against protesters, signals a dangerous attempt to domesticate the revolt and water down its critique. President Obama’s public statements on the issue, which many have welcomed as a healthy censure of police brutality, were essentially a perfunctory reaffirmation of the uncontroversial First Amendment right to free speech—rather than a denunciation of the structural violence experienced daily by the Michaels, the Seans, the Oscars, and all the other marginalized youth whom the US penal machinery exposes to a premature death sanctioned or tolerated by the state.

Alessandro De Giorgi is Associate Professor and Graduate Coordinator at the Department of Justice Studies, San José State University, and a member of the Social Justice Editorial Board. This post was also published in Italian by Commonware.