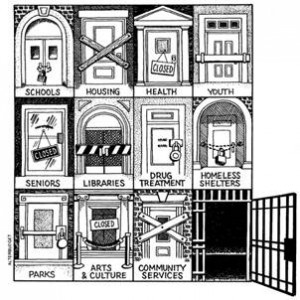 The news has not garnered much attention on the national media, yet it is rather striking: for the first time in the last twenty years or so, crime has been rising in the United States for two consecutive years. The US Bureau of Justice has just released data from the 2012 National Criminal Victimization Survey (NCVS), the statistical tool adopted since 1972 to make up for the “dark figure” of unreported crime that affects official statistics. The report reveals that in 2012 property and violent crimes suffered a 12 percent and 15 percent increase, respectively. Thus, what had looked like an exception in 2011—when, according to the NCVS, violent crime had increased by 17 percent and property crime by 11 percent since the previous year—might instead have marked the turning point of a long cycle of declining criminal activity and the outset of a new trend toward higher crime rates.

A note of caution is of course in order here. Despite the undeniable contribution victimization reports have provided for a more reliable understanding of crime trends in the United States, one should not overlook the many limitations affecting the very design of these surveys. It is well known, for example, that victimization surveys focus narrowly on street crimes while ignoring other, equally or more harmful types of criminal activity, namely white collar crime and state crimes—including instances of police brutality, abuses by prison guards against prisoners, or crimes taking place inside the country’s chronically overcrowded correctional institutions. Not to mention the fact that victimization surveys tend to overlook precisely the social groups that are most vulnerable to criminal victimization in the streets, as a consequence of their precarious living conditions: homeless people, various institutionalized populations, undocumented migrants, or individuals with unstable living arrangements. Finally, NCVS offers a misleading image of crime as a uniform and undifferentiated issue affecting all Americans equally (“crime is up” or “crime is down” for everyone), since it ignores the basic fact that within the segregated landscape of American cities, crime (and punishment) is highly concentrated inside areas of urban destitution marked by racial and class boundaries.

Whatever their statistical reliability, at least these data further illustrate the substantial divergence between rates of criminal activity and the penal strategies deployed by the state, with particular reference to incarceration. Indeed, another report released by the BJS a few months ago, “Prisoners in 2012,” shows that the correctional population of the United States, including federal and state prisoners, declined (although only by a modest 1.7 percent) in 2012, confirming a downward trend that has now entered its third consecutive year. A disconnect between trends in crime and changes in punishment is certainly not new. It has manifested itself with unprecedented intensity over the last twenty years in the United States, although in an opposite direction to the one we observe today: since the early 1990s, plummeting crime rates have been paralleled by a vertiginous growth of the prison population. Such contradictory tendencies should not surprise sociologists of punishment, who have long been arguing that criminalization is not just a response to crime; that the severity of punishment does not necessarily descend from the seriousness of the criminal act; and that levels of social and institutional punitiveness are shaped by economic, political, and cultural factors more than by the actual risk of victimization. Yet a persisting dilemma in criminology—as well as one of the main reasons for the very existence of the discipline, at least in its mainstream variants—is whether state punishment and related technologies of social control have any effect on crime, and here too the evidence is at best inconclusive (for a recent analysis touting controversial policing strategies like “stop and frisk” and “hot spot” policing as the single major factor behind the great crime decline in New York, see Franklin Zimring’s The City That Became Safe).

What, then, should we make of this sudden increase in crime in the United States? How can it be explained? The obvious answer, one that some commentators had started to propose as a bleak prophecy even before the crime increase was recorded, is the recessionary economic crisis that has swept the country since 2007. Indeed, according to well-established models of crime causation, it makes sense to look at the “usual suspects”—rates of unemployment, homelessness, poverty, and so on—to explain shifts in criminal activity, particularly predatory crimes. In this perspective, economic hardships would push a larger fraction of the “truly disadvantaged,” to borrow William J. Wilson’s definition, to commit crimes of survival, which in turn would result in higher incarceration rates. Therefore, penal technologies would be developed by the state simply as a reaction to shifts in criminal activity prompted by socioeconomic transformations that are essentially outside the reach of the state’s regulatory powers. In other words, in this model crime and penal policies are treated as dependent variables, while economic transformations, and, more specifically, economic crises, are treated as an independent variable. Yet we know that in the recent history of the United States such a model has simply not been at work: for most of the past three decades, crime rates have been declining both in times of economic growth and in times of recession, whereas incarceration rates have been rising at a furious pace until three years ago.

I would like to suggest here that a reversal of perspective might be in order. In the age of “mass imprisonment,” close to 1 percent of the US population is in prison or in jail (3 percent if probation and parole are included); one in three black males will go to prison in his lifetime; incarceration is more likely than marriage or college in the life of a young black male; and more blacks are in prison than were in slavery in 1850. Thus, the relationship between economy, crime, and punishment should probably be significantly revised. At the end of forty years of extraordinary concentration of the punitive powers of the state toward the mass criminalization of racialized urban poverty, we should ask whether the penal technologies unleashed by the state at the bottom of the race and class structure of US society have not become themselves constitutive elements of the structural crisis that affects the most marginalized fractions of the urban poor—rather than being simply an institutional reaction to crime as one of the undesirable consequences of such crisis.

Some scholars have recently demonstrated the paradoxical effect of concentrated incarceration on crime. In a process that mimics the economic principle of diminishing marginal returns, when it rises beyond a certain level incarceration will not only relinquish its crime-reducing effect (assuming it ever has one), but it might potentially result in an increase in criminal activity. This is due to the destructive effects of incarceration on already vulnerable individuals and families: financially (lost income, welfare bans for certain convictions, plus phone calls, packages, and trips to the jail), socially (weakening of relationships, loss of social capital, missed educational opportunities, isolation upon release), and politically (felon disenfranchisement). Through the systematic institutional sequestration of entire cohorts of population from already dilapidated urban ghettos, over the last forty years mass incarceration has eroded the social fabric of marginalized communities, displaced large fractions of their populations, depleted their material and immaterial resources, hampered the educational opportunities for a large number of youth, generated a massive diversion of public funds from social services to penal institutions, and (re)produced a large class of socioeconomic pariahs who are essentially unemployable, if not in dead-end and insecure jobs, upon their release from prison (for a powerful analysis of these processes, see Todd Clear’s Imprisoning Communities). The criminogenic effect of the power to punish—and more generally the paradox whereby repressive state intervention often tends to (re)produce the very social problems it is supposed to address—is not an exclusive prerogative of the penal field, as it has been observed in such disparate areas as immigration control, drug policy, and the so-called war on terror. However, the US penal experiment of the last four decades has been so widespread that its crisis-generating effects have extended well beyond the field of crime and punishment, to the point of destabilizing the very social structure of poor urban areas. Furthermore, as Becky Pettit has shown in her recent book Invisible Men: Mass Incarceration and the Myth of Black Progress, the massive warehousing of young disadvantaged minorities has “concealed” a large fraction of the urban poor from society—the media, public opinion, policymakers—as well as from most national surveys, thus reinforcing the ideological misrepresentation of the United States as a post-racial society set on a bright path toward declining social inequalities, narrowing racial gaps, and widespread social mobility. If prisoners were to be included in social and economic surveys, these would reveal that mass incarceration has essentially obliterated the social gains made by African Americans since the civil rights era.

The recent data indicating a timid decline in the US prison population should be welcomed as good news. It should also be noted, however, that this decline has taken place in the wake of budgetary and fiscal emergencies, rather than of any structural process of penal reform—a circumstance that renders these trends extremely precarious and reversible. Nothing short of a structural process of decarceration at the federal, state, and local levels would be needed to begin to dismantle the gargantuan penal machine the United States has built to neutralize its social contradictions; nothing short of a massive reinvestment in social welfare would begin to address the permanent crisis of the American urban poor.

* Alessandro De Giorgi is Associate Professor and Graduate Coordinator at the Department of Justice Studies, San Jose State University, and a member of the Social Justice Editorial Board.

2 thoughts on “Crime Is Up? Decarcerate!”