There are moments when our longings for social justice cloud our vision, times when the way we want the world to be blocks our understanding of the way things really are. A good example of this is the notion of the United States’ prison system as totally driven by profit-hungry corporations that ruthlessly advance their bottom lines on the backs of the exploited. This myth contains a modicum of truth: of course, the 1 percent and beyond do make money off of locking people up. Corporations like Kitchell Construction have done very well building more than 110,000 prison “beds.” At roughly $100,000 each, that comes to about $11 billion, which is pretty serious money even for the Walton family. Despite the fields of money that have been reaped from the prison and jail boom, this economic aspect of prisons has spawned some myths that often get in the way of effectively opposing mass incarceration. 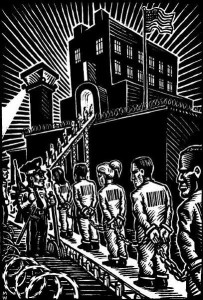 The first of these is the idea that private prison corporations are the main culprits. A wide spectrum of campaigns has focused on these corporate targets. Activists have opposed the private prisons’ attempts to colonize new territory, blocking immigration detention center proposals in Illinois, halting a bill to privatize the entire prison system of the state of New Hampshire, and driving the GEO Group “brand” off the face of the football stadium at Florida Atlantic University. These are inspiring victories and such struggles will continue. However, we also need to keep the bigger picture in mind: private prisons are not the heart of the beast. In reality, at least for the moment, they are bit players. Among them, they only control about 8 percent of prison “beds” in the system nationwide. They are more important in certain states (e.g., Texas, New Mexico) and are also a primary force in the key current growth area for incarceration: immigration detention centers, where they own and/or operate about half the immigration detention center “beds.” But if we follow the money, we will find that the total revenue for the two largest prison providers, Corrections Corporation of America (CCA) and the GEO Group, came to a little over three billion dollars in 2012. That is less than half the state corrections budget for California. The real villains in the world of the incarceration game remain the state prison systems. While economics is more than incidental in the expansion of prisons, mass incarceration remains a politically driven project that has built a huge popular base of support. Politicians have played the “law and order” card, the fear of crime card, and the middle classes across the country have responded, often lending their backing to building more carceral institutions at the expense of education and other social services. Although there is a special immorality about making profit from caging people, especially given the disproportionate incarceration of African Americans and Latinos, it is no less morally bankrupt to spend taxpayers’ money for prisons and jails at the expense of jettisoning the country’s social welfare system and self-identity as a caring society. Moreover, even though tales of abuse in private prisons abound, the state and federal prison systems have given us the supermaxes and Special (or Security) Housing Units (SHUs) where people live in torturous total isolation for years on end. Florence ADX, Pelican Bay SHU, and the isolation units in Angola, Louisiana, are all government-operated institutions. In fact, the privates try to stay away from the “hard cases,” preferring to focus on cherry-picking the people with nonviolent convictions and no major medical problems. Recruiting low cost “clients” helps the bottom line. So let us remember to confront the political powers that be, including some cherished icons in the Democratic Party, with at least as much venom as the private corrections companies when we carry out our campaigns.

The second convenient myth of the prison system is that it is nothing more than a string of slave labor camps where hundreds of thousands, if not millions of people work under contract to major corporations for meager wages. Late last year, researchers Stephen Fraser and Joshua Freeman released a study that claimed that “penitentiaries have become a niche market for such work. The privatization of prisons in recent years has meant the creation of a small army of workers too coerced and right-less to complain.”

Their perspective has resonated with a number of news services, anti-mass incarceration blogsters, and activists. For example, a recent report from Russian news service RT claimed that prisons are “becoming America’s own Chinese-style manufacturing line.” Huffington Post picked up the story, quoting Fraser and Freeman:

All told, nearly a million prisoners are now making office furniture, working in call centers, fabricating body armor, taking hotel reservations, working in slaughterhouses, or manufacturing textiles, shoes, and clothing, while getting paid somewhere between 93 cents and $4.73 per day.

Fraser and Freeman went on to name a number of companies like Chevron, Bank of America, AT&T, and IBM that allegedly are making superprofits from cheap prison labor. I spent six and a half years in federal and state prison systems and this analysis has little relation to reality. Modern-day prisons are warehouses. People suffer and die in prison from the total lack of stimulus and activity. My recollections of prison yards are of hundreds of men trying to pump some meaning into their lives with maniacal exercise routines, obsessive cleaning of their living quarters, or absolute devotion to religious practice. Many also organized hustles–sports betting pools, making arts and crafts, or writing legal briefs to make a few extra bucks for a jar of coffee or a few candy bars from the commissary. Some, though a distinct minority, found a way to focus on intellectual growth. But working in a corporate sweatshop was not on our radar.

The statistics on this bear me out. Virtually all private-sector prison labor is regulated under the Prison Industries Enhancement Certification Program (PIECP). Any prison that publicly markets goods worth more than $10,000 must register with PIECP. PIECP’s first quarter report for 2012 showed 4,675 incarcerated people employed in prison or jail PIECP programs. This represents about 0.25 percent of the 2.3 million people behind bars.

Likely the largest single user of contract prison labor is Federal Prison Industries, which handles such arrangements for the Bureau of Prisons (BOP). Of the nearly 220,000 people in BOP facilities, just 13,369, representing approximately 8 percent of the work eligible “inmates,” were employed as of September 30, 2012. However, the overwhelming majority of this production was under contracts with government departments such as the Defense Department and Homeland Security, not private corporations.

There is an economic logic to why so few corporations use prison labor, despite the low wages and apparent rigid control over the workforce. Prisons are first and foremost about security. Production takes a back seat when there is violence on a yard, especially if it is directed at staff. A security situation may lock down a prison for days, weeks, or even months. No production deadlines are going to get in the way of security. Given that reality, along with the excessively bureaucratic nature of corrections institutions, sweatshops in the global South look like a much better bet for corporate profit margins. The claim by Vicky Pelaez in Global Research earlier this year that “thanks to prison labor, the United States is once again an attractive location for investment in work that was designed for Third World labor markets” is totally off the mark.

Such misconceptions about the connection between incarceration and labor do more than merely distort the facts. They also draw our attention away from the central labor issues underlying the growth of the prison population. Prison expansion is a by-product of the immiseration of urban neighborhoods, especially those that are largely African American. This deindustrialization has robbed these communities of jobs and the neoliberal restructuring of the state has stripped away the institutions of social welfare. Instead, money has poured into security and a narrowly defined “public safety”–fighting a failed War on Drugs and beefing up local police departments through federal grants that equip small-town law enforcement as if they are in the middle of a war zone. Even my own small county of Champaign in central Illinois has found the resources to purchase a drone while mental health facilities continue to close down.

The negative impact of incarceration on this displaced and discarded urban workforce continues even once they have completed their sentences. People with felony convictions cannot get Food Stamps in many states, or qualify for TANF. Many local housing authorities bar people with drug convictions, often evicting the family of those returning from prison if they house their loved ones post-release. The job market is hostile territory as well for those with a felony. Though a “Ban the Box” movement has scored victories in 12 states and over 40 counties and cities, most employment applications still contain the question about criminal background. For those of us with felony convictions, that question equates with an instant closing of the door of opportunity. Then there are all the occupations and professions with certification processes that bar or restrict people with felonies. For example, a study by the Mayor of Chicago’s office found that of 98 Illinois state statutes dealing with professional licensing, 57 contained restrictions for applicants with a criminal history. Even some people applying for licenses to become barbers or cosmetologists faced legal impediments.

People who have been involved in opposing mass incarceration often refer to the entire system as the prison-industrial complex, or PIC. Certainly, the prison sector constitutes an industry. But as the term PIC implies, the relationships between the political and economic forces at work in this process are complex. Though it is convenient to focus on corporations as the main drivers of the grandest social policy debacle of the last three decades, mass incarceration will only be reversed when we effectively contest its political agenda. That agenda is founded on the idea of criminalizing the poor and building on the fear of the rising presence of people of color in this country. As Ruthie Gilmore and Michelle Alexander have pointed out, it is part of a broader political backlash against the “welfare state” and the social movements of the 1960s and 1970s, especially the Black liberation struggle. We do need to stop the CCAs and the GEO Groups to fundamentally change the criminal justice system in the United States, but, more important, we need to dislodge the mindset and the political leaders who have built popular support for “lock ’em up and throw away the key.”

* James Kilgore is a research scholar at the Center for African Studies at the University of Illinois (Urbana-Champaign). He writes on issues of mass incarceration with a focus on electronic monitoring and labor. He is also the author of three novels, all of which he drafted during his six and one-half years in prison, 2002-2009. He can be contacted at waazn1@gmail.com or by visiting his website (www.voiceofthemonitored.com).

3 thoughts on “Confronting Prison Slave Labor Camps and Other Myths”