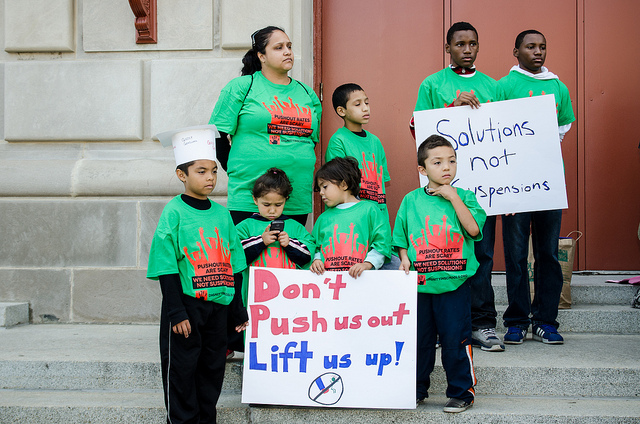 The arc of the school-to-prison pipeline begins in elementary school and moves through middle and high school. Youth then land in the juvenile legal system and, eventually, in the country’s vast prison system. According to current Assistant Secretary of Education D. Delisle, during the 2009–2010 school year over 3 million students were suspended in the United States, almost 110,000 were expelled, and over 240,000 were referred to the police. The US Department of Education’s Office for Civil Rights reported in 2014 that “Black children represent about 18% of the entire school population, yet 42% were suspended at least once, and 48% more than once.” Although it is male students, mostly Black and Latino, who bear the brunt of this exclusionary system, girls do not lag too far behind. The same office reported that in the year 2011–2012, Black girls were suspended at a rate of 12 percent compared to 2 percent for White girls, and at higher rates than girls of any other ethnicity.

According to Ed. Data research, 30 percent of Latino and 50 percent of Black students in California are currently more likely to be suspended or are subjected to harsher penalties than their White and Asian American counterparts are. In 2009, the American Civil Liberties Union argued that school suspensions, as an issue of social control, do not advance education, but instead represent a criminalizing trend. This punitive paradigm seriously deepens the academic gap across socioeconomic and ethnic groups. Numerous studies show that children and youth sent out of the classroom perform poorly academically and fail to graduate from high school at staggering rates. In the 2009–2010 school year, for instance, nearly one of every three Black or Latino students dropped out of California schools.

Clearly, zero tolerance as a strategy of social control—enacted into law by the Free-Gun Schools Act of 1994—applies the harsh approach and philosophy of the adversarial legal system to the educational context. It strongly mirrors the habitual offender laws, better known as three strikes. Evidence illustrates that the current pace of suspensions in schools cannot be sustained. Fortunately, some states have begun to move away from zero tolerance.

The search for intelligent solutions was initially slow, but by 2006, 33 states had incorporated ideas and approaches from restorative justice into their juvenile statutes and public school policies. Joint actions by the Obama administration’s Departments of Justice and Education contributed to the trend. Consequently, states, counties, and school districts have been mandated to rethink the use of draconian modes of discipline against rule-breaking students. Instead, they are encouraged to embrace preventive, restorative approaches.

For instance, Florida’s Broward County recently created a program to aid students who commit offenses that formerly would have ensnared them in the juvenile legal system. The program, Preventing Recidivism Opportunities through Mentoring, Interventions, Support, and Education (PROMISE), seeks to attain “short and long term academic success, aligning best practice models and Restorative Justice principles, and developing pro-social and resiliency skills.” It has its own office in Fort Lauderdale and actively involves the cooperation of local civil rights organizations and schools.

Since 2009, restorative justice has been the official policy of California’s Oakland Unified School District. The model used there includes prevention and supports reentry. This approach seeks to lower suspension and expulsion rates and to foster a positive school climate. It assumes that these conditions will eliminate racially disproportionate zero-tolerance practices and the consequent tracking of students into the prison pipeline.

Such approaches position school districts on the right path. If consistently implemented, schools may begin to rid themselves of zero tolerance as their central social control strategy. But the time has come to go deeper and farther. For starters, school districts ought to begin using the best restorative justice practices developed in international experience and in Native American communities.

A set of at least five fundamental principles must govern any restorative action: all parties implicated in a dispute must participate in well-organized meetings; participation must always be free of coercion; participation is an act of truth telling; the entire restoration processes is public; and the offender must accept responsibility.

A substantial push forward would necessarily go beyond federal government action to include state boards of education, county offices of education, local municipalities, and law enforcement agencies, as well as the advocacy of school district boards of education. These concurrent efforts may be the only way to fully embrace restorative justice and to remove zero tolerance from every school in the country.

* Gilberto Arriaza (email: gilberto.arriaza@csueastbay.edu) is a member of the Social Justice Editorial Board and professor in the Department of Educational Leadership at California State University, East Bay.