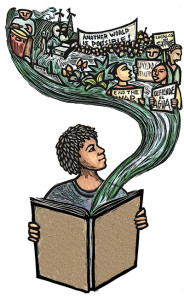 University administrators, colleagues, liberal progressive politicians, and all of us whose positionality is safely constituted within systems of white supremacy more often than not actively resist unlearning dominance even as we lay claim to a knowing expertise of and paternalistic benevolence for the oppressed. At the University of Tennessee, where I work, we will begin the Fall 2016 school year with a defunded Office of Diversity and Inclusion, the abrupt closure of our Pride Center, a new law allowing weapons on campus, and ongoing efforts to privatize the university system, all against the backdrop of a Title IX lawsuit that exposes long-term administrative and athletic dismissals of campus sexual assault and rape culture.

I seek to remind us of the intentional manner in which the political and administrative work of misrecognition is done, where the conditions of the violence all around us are overlooked and plausible strategies for the reduction of harm are ignored and denied—a politics of brutal disregard. This process depends upon the perpetuation of inaccuracies, omissions, the exclusionary selectivity of facts and sources, and more significantly, upon overt practices of mis-naming landscapes of violence. In few disciplinary spaces is this double life of the undercommons more apparent, its liberating potential less possible, than in my own professional field, known as criminology or criminal justice.

One essential problem of the contemporary political moment is not simply the resurgence of law-and-order conservatism and its fascist underpinnings, but the fact that liberalism-as-refuge has always facilitated these formations, whether in the form of the neoliberal university or the rise of mass incarceration and police power.

The need to critically look at and change the very foundations of neoliberalism as practiced within the university is made all the more urgent in the face of endless repetitions of police killings, mass shootings, vitriolic racism, trans- and queer-phobia, and incoherent national responses to violence against vulnerability in the United States. From the churches of Charleston to the Pulse night club in Orlando, historic sanctuary spaces for black, Latinx, queer and trans communities are ongoing sites for deadly mass shootings, while simply attempting to exist in neoliberal economies is a systematic site of black harassment and death by police.

The work of slow death continues as well. Across the US South, a dramatic rise in state efforts to limit LGBT rights converges with intersectional forms of racial and gender oppression amid rising rates of targeted violence and suicide. It has culminated in the perfect storm of bathroom bills; religious exemptions for mental health providers, schools, and businesses as well as marriage refusal; concealed weapon and gun rights protections; anti-black racist “Blue Lives Matter” legislation; and legislative attacks on university governance directed at diversity.

In the academy, white methodological myopias have culminated in a lack of accountability in theorizing our own place in the production and maintenance of abject vulnerability. Disciplinary boundaries cannot limit the needs of understanding survival against harm and violence. In the absence of accountability, we produce and sustain abstractions that kill: racism, criminalization, heteropatriarchy, and even criminal justice, a system best understood in Ruth Wilson Gilmore’s terms as “the state-sanctioned or extralegal production and exploitation of group-differentiated vulnerability to premature death.” Reforms and tactics produced in the neoliberal university add up to a tenacious culture of compromise that leaves the most vulnerable even more precariously positioned and the carceral state further entrenched.

Although the university has been a significant site of struggle in key historical moments, its present salvageability and the terms of its future, like those of criminal justice, are subject to foreclosure. The only way I can see forward is the rigorous work of naming, analyzing, and destroying the conditions of heteropatriarchal academic raciality and its foundations in white supremacy.

Stefano Harney and Fred Moten remind those who have imagined the university as a safe haven, a space in which our own politics were mobilized, where tactics and tools of survival materialized, that to “abuse its hospitality, to spite its mission, to join its refugee colony, its gypsy encampment, to be in but not of—this is the path of the subversive intellectual in the modern university.”

Their call for an undercommons is grounded in the lived experience and fugitive history of the oppressed whose physical, psychic, and intellectual labors have been a chronic site of violent extraction, exhaustion, disappearance, and, simultaneously, a perpetually generative living archive of rich underground strategies of survivability centered upon abolition and freedom. Derived from a politics of blackness and queerness, these forms have most recently manifested in new sites of visibility, including student uprisings and the organizing efforts of Black Lives Matter.

Before abolition is even allowed to the table, it is too often construed as destructive and aimless, as opposed to practical life-giving survivability in the present and a visionary space for imagining locally determined flourishing lives in the future. Rarely is it recognized as a way to begin the hard conversations that become the long-term processes of making the world we want to live in. The hypervigilance of trauma becomes a source of energy for transformation. Study becomes life-extending sustenance—not a space of capital, licensure, hypermasculine one-upmanship, or unending debt. Abolition is a space, as Meghan McDowell writes, of “insurgent safety” that privileges emergent forms of counter-carceral communication. It manifests itself in prefigurative political projects invested in interdependence, mutual aid and reciprocity, collective subsistence, and play and joy as strategies to reduce and respond to harm.

And it happens everywhere all the time around us. It happens in intentional living spaces; in the living rooms and kitchens of friends, scholars, activists, and loved ones; in the classroom outside of official university use; in the plotting of nascent organizers at office hours; at the jail after a sobbing friend phones; in the pride parade where an abolished university center marches anyway to the cheers of unprecedented crowds; in the life support of Black Lives Matter initiatives and the care of battered bodies and minds that return from the line. It is a mode of intellectual life that reconsiders action, freedom schools, social justice commitments, and forms of intellectual and practical life support amidst a burgeoning groundswell of blogs, commentaries, social media campaigns, crowd-sourced syllabi, toolkits, and websites for revolutionary forms of learning and organizing outside of the university.

Abolition recognizes that sustainable action takes shape through organizing within, without, and against the university, the prison-industrial complex, and the institutional structures of neoliberal capital that will always offset the possibilities of flourishing lives, communities, and knowledges. It seeks to address immediate suffering always everywhere—in the classrooms and hallways of the university, the visitorless jail tanks and dehumanizing prison cells of neoliberal capitalist formations, with an unwavering faith in the spaces that are possible beyond. Let’s take seriously the requirements of freedom and the work that eventually leads to transformation. Let’s make this school year different, unrecognizably so.

Camp, J. T. 2016. Incarcerating the Crisis: Freedom Struggles and the Rise of the Neoliberal State. Berkeley: University of California Press.

Davis, A. 2015. Freedom Is a Constant Struggle: Ferguson, Palestine, and the Foundations of a Movement. New York: Haymarket Books.

McDowell, M. 2016. “The police are not keeping our communities safe”: Theorizing safety beyond the criminal justice system. Unpublished manuscript presented at the New Directions in Critical Criminology Conference, May 2016, Knoxville, TN.

* Michelle Brown is associate professor of Sociology at the University of Tennessee. She is the author of The Culture of Punishment (NYUP, 2009), co-author of Criminology Goes to the Movies (with Nicole Rafter; NYUP, 2011), and co-editor of Media Representations of September 11 (Praeger, 2003). She is currently co-editing the Sage journal Crime Media Culture; The Routledge International Handbook of Visual Criminology; the Oxford Research Encyclopedia on Crime, Media, and Popular Culture; and the Palgrave MacMillan Crime, Media and Culture Book Series.