In light of recent controversies among progressives and radicals concerning Prop. 62, which would abolish the death penalty in California and replace it with life without parole, we are hosting two pieces that look at the hard issues surrounding the death penalty and explain the reasons for voting Yes or for voting No. Below is the “Yes” piece by Hadar Aviram; you may find the “No” piece by Josh Meisel here. 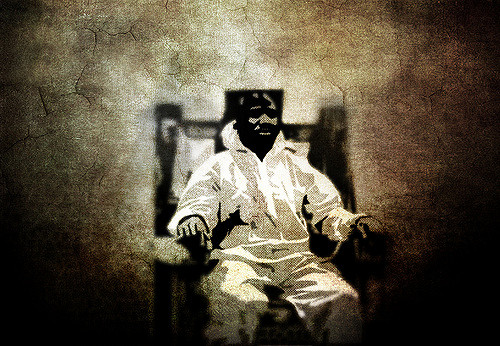 It’s unsurprising that the Prop 62 campaign, which calls for death penalty repeal, aims its rhetoric primarily at centrist voters; its two main arguments, the obscene costs ($150 million a year) and the risk of wrongful convictions, have strong bipartisan appeal. But lately I hear qualms about voting yes on 62 from progressive and radical voters.

If you are such a voter, I hear you—your frustration with the slow pace of criminal justice reform, your concern that unacceptable punishments will become retrenched, and your genuine, urgent desire to move things faster and farther for vulnerable populations.

But when you tell me you might be voting against repeal, it frightens me.

• Entrenchment of Life without Parole

You fear that death penalty abolition will normalize and entrench life without parole—a hopeless, soul-destroying punishment, that offers no hope or prospect, and especially brutal for people incarcerated at a young age.

I agree with you. Life without parole is, indeed, an extreme form of punishment. Like you, I am committed to a struggle to open a window of hope for all prison inmates.

Unfortunately, the struggle against life without parole cannot begin until we win the struggle against the death penalty, which is within reach. This is, unfortunately, how political reform works: incrementally, with bipartisan support, and supported by a coalition. As I explain in Cheap on Crime, incrementalism produced the considerable reforms that occurred since 2008, and this one will be no exception.

Consider same sex marriage. Radical activists sought marriage licenses in the 1970s, when such acceptance was unthinkable. Then, the movement regrouped, advocating for lesser protections (domestic partnerships, workplace protection). These incremental steps led to a gradual change in public opinion between the mid-1990s and the early 2010s, ending in legal triumph.

Finally, consider marijuana legalization. Recreational marijuana would not be within our grasp today if progressive voters at the time rejected medical marijuana as insufficient reform.

Progressives are ready for change, and already know that reformed, aging inmates are not a public safety risk. But for that to happen, a consensus must develop among larger constituencies that are not ready for it yet, and it will not develop before the death penalty is repealed.

• Life without Parole as “the Other Death Penalty”

The horrors of life without parole notwithstanding, being on death row is an appreciably different experience. 747 people live in solitary confinement, without access to social and educational opportunities, in a dilapidated facility. Moreover, constant litigation pressure is fending off executions for the time being, but can you imagine living with the uncertainty of whether you’ll be executed by the state some day? In Jones v. Chappell (2014), Judge Carney found the death penalty unconstitutional for precisely this reason: the delays and uncertainty about one’s own fate. Although Jones did not prevail in the Ninth Circuit, the reasoning behind it is sound: it is very different to be a death row inmate than a lifer.

Even if you truly have no preference between the death penalty and life without parole, shouldn’t the annual $150 million price tag tip the scale toward repeal? Is it conscionable to maintain a punishment that has no virtue, when the savings could improve education, health care, welfare, and infrastructure?

Finally, think about the impact of repeal in California on other retentive states. California has the biggest death row in the country and has been the vanguard of penal innovation, for better and for worse: we pioneered determinate sentencing, enhancements, and the most punitive version of Three Strikes. But we have also pioneered important change in the opposite direction, with realignment, Three Strikes reform, and Prop. 47. The death penalty isn’t different across states, but abhorrent in all of them. Reform in Texas begins here, with you.

• Deprivation of Due Process

The California Constitution awards death row inmates free post-conviction representation. But losing these theoretical due process advantages would have very little meaning in practice: as of August 2016, 356 inmates lack habeas representation, and 46 of them don’t even have appellate representation. The average wait time for an attorney on death row is 16 years. Any effort to train and introduce more lawyers (as Prop 66 supporters propose) would require hundreds of attorneys just for cases now pending, cost tens of millions of dollars, and create speedy proceedings that would increase the risk of wrongful executions.

Would death row inmates wish to retain these so-called advantages for the price of years on death row with a possible execution? Don’t look for answers in the methodologically circumspect survey that surfaced four years ago, which, for all we know, might have been answered by a few represented inmates on death row rather than by the hundreds who languish without representation. Instead, ask Shujaa Graham, who spent 16 years in San Quentin for a crime he did not commit. For that matter, ask all 150 death row exonerees, who are passionately campaigning for Prop 62. Have you heard a single exoneree praising his good luck in being sentenced to death?

Or, you might consider the perspectives of lifers. I teach lifers in San Quentin, and what I hear from them is wall-to-wall support of death penalty repeal, a solid understanding of the incremental nature of reform, and a desire that an issue involving 747 inmates be resolved sensibly so that we can turn our attention to reforming life without parole.

The origins of prison labor—namely, as an exception to slavery abolition—make us uneasy; prison labor perpetuates, in a new guise, abhorrent forms of coercion and racial domination.

But abolishing prison labor is not on the ballot. Abolishing the death penalty is.

Some progressive voters bristle at the campaign’s emphasis on prison labor and victim compensation, but prison labor is not a novelty—it has existed for a very long time under Section 2700 of the Penal Code, which requires that inmates work, and which is completely unaffected by Prop. 62. The outcome of repeal would be that Section 2700 would apply to a few hundred more lifers—simple because they would now be lifers, not death row inmates.

The only modification would be an increase of the maximum restitution withholding from wages (not family donations) from 50% (which is already in effect) to 60%. Is objecting to this minor increase in victim restitution a worthy progressive cause? Remember: this increase in restitution is included in the proposition to make sure that a majority of Californians—not just progressives—vote Yes on 62. It also ensures the support of victim families, an important constituency. This minor compromise is part and parcel of political achievement.

• Dissatisfaction with the Initiative Process

I agree: the initiative process is extremely problematic, plagued by economic interest deceptive ads and easily manipulated voters, especially in an extremely polarized state. But compared to propositions laden with complex policy details, Prop. 62, which presents voters with a yes/no question and has clear implications, is one of the least objectionable uses of the referendum method.

Moreover, voting “no” wholesale here would be a grave mistake. Repeal advocacy has not succeeded so far in the legislature, the courts, or the governor’s office, and not for lack of trying.

The only one who can repeal California’s death penalty is YOU.

When you look back at this election, which value will you be proud you upheld: your qualms about initiatives, or your opposition to the death penalty?

Sometimes, even with the best intentions, overthinking can lead us astray. Listen to your heart and your common sense. Are you against the death penalty? Good. So am I. For the reasons the campaign highlights, but also for all the traditional, good reasons to be against the death penalty: because it is barbaric, inhumane, risky, racially discriminatory, and obscenely expensive.

* Hadar Aviram holds the Harry and Lillian Hastings Research Chair at UC Hastings College of the Law and is the Vice-President and President-Elect of the Western Society of Criminology. She is the author of Cheap on Crime: Recession-Era Politics and the Transformation of American Punishment (UC Press, 2015) and the owner of the California Correctional Crisis blog.