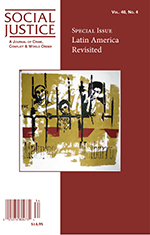 With articles by veteran observers and activists as well as up-and-coming scholars, this issue discusses the current state of Latin America, now two decades into the uneven transitions to democracy following an era of dictatorships and armed revolutionary conflicts. The issue’s first section analyzes the historical and ongoing limitations of democracy and development in the context of neoliberal capitalism, focusing in particular on Chile, Argentina, and Mexico. The next section presents contrasting views of the Venezuelan political system, analyzes the horrors of femicide in Guatemala, and features postcards from Cuba. The issue closes with a tribute to the late Helen Safa, a pioneering feminist and scholar of Latin America.

Crimes without Punishment: An Update on Violence against Women and Impunity in Guatemala
Karen Musalo & Blaine Bookey