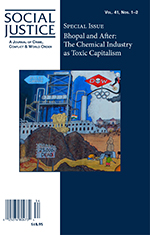 Special Issue: Bhopal and After: The Chemical Industry as Toxic Capitalism, Vol. 41-1/2

Thirty years after the Bhopal tragedy, this issue revisits the meaning of the disaster, its causes, and its consequences. The first section deals with the aftermath of the catastrophe, examining the struggle over the memory and memorialization of Bhopal and the lamentable failure of the medical and legal professions and systems to provide relief and justice to the survivors. The second section examines an example of toxic capital in action in northeast England, the failures of international regulation of chemical hazards, and the chemical warfare attack on Halabja in Kurdistan. The final section looks at resistance to the depredations of toxic capital, beginning with the movement for justice in Bhopal, while also considering recent struggles in India.

“Just like any other city”: The De-Gasification of the Bhopal Gas Relief System
Bridget Hanna

Criminal Failure and “The Chilling Effect”: A Short History of the Bhopal Criminal Prosecutions
Tim Edwards

Indian Media and the Struggle for Justice in Bhopal
Shalini Sharma

“All the World’s a Stage”: The Bhopal Movement’s Transnational Organizing Strategies at the 2012 Olympic Games
Bridget Botelho and Stephen Zavestoski

Bhopal and Struggle for Social Justice in India
Madhuresh Kumar

Be the first to review “Special Issue: Bhopal and After: The Chemical Industry as Toxic Capitalism, Vol. 41-1/2 ” Cancel reply